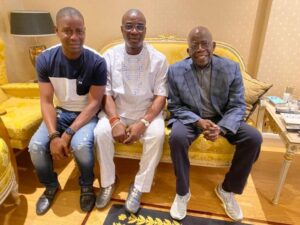 Fuji music icon, King Wasiu Ayinde Marshal better known as KWAM 1 on Friday paid a visit to Bola Ahmed Tinubu, a former governor of Lagos State who is currently in the United Kingdom for medical attention.

It is believed that the visit is to wish the former governor a quick recovery.

KWAM 1’s visit will be one of the numerous visits received by Tinubu since he left the shores of this country in July.

According to speculations, Mr Tinubu who is the national leader of the ruling party, All Progressives Congress (APC) has interest in the country’s number job in the next general elections in 2023.