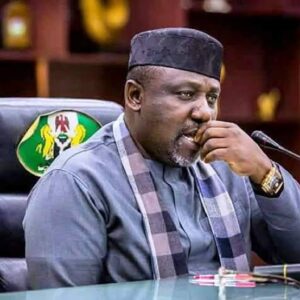 Former Governor of Imo State, Rochas Okorocha has been remanded in the custody of the Economic and Financial Crimes Commission, EFCC.

Naija News reports that Justice Inyang Ekwo of the Federal High Court in Abuja gave the order on Monday during the arraignment of the presidential aspirant by the EFCC over alleged N2.9bn corruption charges.

The EFCC had earlier arraigned Okorocha, an ally to the former governor, Anyim Nyerere Chinenye and five companies on a 17-count money laundering charge.

Dressed in his usual green coloured Agbada with a brown cap to match, Okorocha who is wearing a pensive mood was made to sit near a dock where his plea on the fraud charges against him would be taken this morning.

Okorocha’s usual smiles and waiving of the handkerchief to admirers were completely absent in his mood in the courtroom.

In his ruling, Justice Ekwo ordered that both Okorocha and Chinenye be detained in EFCC custody pending the determination of their bail applications.

The presiding judge, however, adjourned till Tuesday for the hearing of the accused bail applications.

The EFCC had forcefully invaded the premises, using teargas to disperse journalists from the compound. The commission accused Okorocha of refusing to honour invitations to him after jumping the administrative bail granted to him following allegations of stealing public funds to the tune of 2.9 billion Naira.