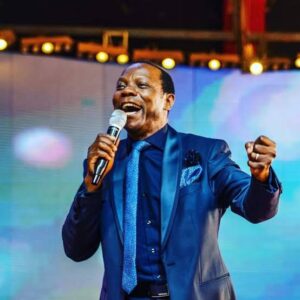 Controversial media personality, Daddy Freeze and Peter Okoye of Psquare have reacted to the video of Ugandan pastor Jackson Senyonga celebrating the death of prophet T.B. Joshua with his members.
Naija News earlier reported that Nigerian televangelist and founder of the Synagogue Church Of All Nations (SCOAN), Prophet Temitope Balogun Joshua (alias TB Joshua) reportedly died in Lagos on Saturday evening after concluding a programme at his church in Ikotun.

The cause of death was not immediately disclosed but family sources said his remains had been deposited at the morgue and an autopsy would be performed forthwith.

YOU MAY ALSO LIKE:   ISG unfolds 2020 Economic Plan for Africa

In the video shared, the Ugandan pastor questioned the late prophet, saying ;“What makes you think that you can kill others because you want sacrifices”

Reacting to this, Freeze outrightly condemned the pastor’s action, saying; ”Are they rejoicing over TB Joshua’s death? Even if they were sworn enemies, is this what the Bible teaches?🙄◄ Proverbs 24 ►

[17] Don’t rejoice when your enemies fall;

don’t be happy when they stumble.

[18] For the LORD will be displeased with you
YOU MAY ALSO LIKE:   Aregbesola is a frustrated agent trying to impress those he serves —Yoruba group

and will turn his anger away from them.”

@Peter Of Psquare reacted to the video, he wrote; ‘This life just do you! Nobody send you’