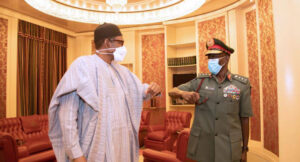 President Muhammadu Buhari on Monday ordered a lot of changes in the nation’s security operations during a meeting with the newly appointed Chief of Defence Staff (COAS), Maj.-Gen. Farouk Yahaya.

Newspot had earlier reported that Buhari met with Yahaya at the Presidential Villa, Abuja.

Speaking to State House correspondents after the meeting, Nigeria’s Minister of Defence, Major General Bashir Magashi (rtd), said Buhari shared his military experiences with the new COAS and reminded him of the current “pressure on security” in the country.

On what President Buhari told the new COAS, the minister said: “He told him that there’s a lot of pressure on security and being an actor, at one point or the other, he has given us a direction in which we can learn from his experiences and apply them to our modern operations and I think we have taken the advice seriously.

“The issue of synergy among the security forces was also stressed and I’m sure there will be a lot of changes as regards to the security operations in this country.”

“We are taking the challenge, but you know, really, this is the constitutional responsibility of the police, we are only an aid to the police and we are giving maximum cooperation to the police in order to see an end to this banditry and insecurity in the Northwest, otherwise I think it’s quite different from the Northeast.

YOU MAY ALSO LIKE:   Star-Studded Movie "The Enemy I Know" to Hit Cinema October 11
IPOB/BOKO HARAM: See What Buhari Told Chief of Army Staff In Also Rock 2021-06-08
Oluwasegun Adesuyi
Share