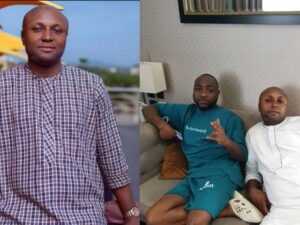 It was earlier reported that Israel Afeare better known as Israel DMW questioned the morality of most Nigerians whilst declaring his unwavering support for embattled super cop, Abba Kyari.

This is coming after social media celebrity, Hushpuppi alleged that he bribed Abba Kyari to arrest a co-fraudster.

The police Deputy commissioner, however, dismissed Hushpuppi’s claim, saying he did not receive any money from the socialite as alleged.

Despite Kyari’s testimony, the US Federal Bureau of Investigation (FBI) has secured a court order for his arrest following his indictment in the confessional statements made by the alleged fraudst

Reacting to the report, Israel pledged his support for the super cop, insisting that Abba Kyari is a clean police officer who has continue to nab wild robbers and kidnappers. He further questioned the morality of many Nigerians, revealing the country has no saints.

According to controversial blogger, Cutie Julls, Isreal was sacked hours after making that statement on social media.

YOU MAY ALSO LIKE:   Just In: CAN Commends Senate Over U-Turn On Electronic Voting, Transmission

Taking to Instagram to say this, Cutie wrote “Exclusive 100-% confirmed information reaching our hub is that Nigerian sensational musician, Davido has sacked his logistics manager, Israel DMW with immediate effect. We are not sure if this is linked to his resent constant dragging FBI online in regards to fraud cases which involves Hushpuppi and Abba Kyari or his other misconducts. But the bottom line is that, Israel DMW is no longer Davido’s logistics manager or a member of his team. Anyone who does business with him should note that Whatever business they engage in has nothing to do with Mr David Adeleke or the “DAVIDO” brand. Thank you”