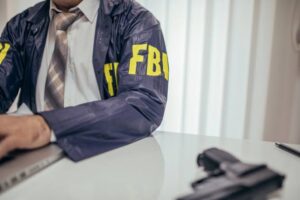 The Inspector-General of Police, Usman Baba on Thursday met with officials of the Federal Bureau of Investigation, who demanded the arrest and extradition of Deputy Commission of Police, Abba Kyari, to the United States.

According to SaharaReporters, a top source disclosed that four FBI agents met with the IGP on Thursday asking Kyari to be extradited to the United States for interrogation over an alleged bribe received from internet fraudster, Ramon Abbas, popularly known as Hushpuppi.

The source noted that the agents have returned on Friday (today) to ensure their demands are met, citing the urgency of the case.

YOU MAY ALSO LIKE:   Five Suspected kidnappers Burnt To Death By Angry Youths In Edo

He said, “FBI agents met with the IGP yesterday (Thursday) to demand Abba Kyari’s arrest and extradition to the United States citing the urgency of the case. Four FBI agents returned to the IG’s office this morning, they are there asking the IGP to release Kyari for interrogation.”

Meanwhile, the Inspector-General of Police has ordered an internal review into the allegations leveled against DCP Abba Kyari.

Reacting in a statement sent to Naija News on Thursday evening, Police spokesperson, Frank Mba, said the IGP has ordered an internal review.

“Sequel to the receipt of allegation and indictment processes from the Federal Bureau of Investigation (FBI) against one of the personnel of the Nigeria Police Force, DCP Abba Kyari, the Inspector General of Police IGP Usman Alkali Baba psc (+), NPM, fdc has ordered an internal review of the allegations.

YOU MAY ALSO LIKE:   2023: Northern Youths Stage Rally To Endorse Emefiele For President

“The Nigeria Police Force reaffirms its commitment to the pursuit of justice and the strengthening of its professional relationship with the FBI and other international partners.

“Further developments on this case will be communicated to members of the public accordingly,” the statement read.