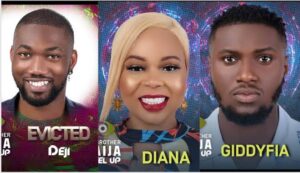 Big Brother Naija ‘Level Up’ housemates Deji, Diana, and Giddyfia have been evicted from the reality TV show.

Diana and Giddyfia who spent 43 days in Big Brother Naija’s house were evicted after securing the lowest votes from viewers.

While Deji, one of the fake housemates, stayed only 36 days.

Their eviction came 6 days after one of the housemates, Amaka, was evicted.

The host, Ebuka Obi-Uchendu, announced their removal during the live eviction show on Sunday.

During the Eviction Diary Session, Diana told Big Brother that the session was mentally beneficial and prepares housemates for possible eviction.

“I packed 100 outfits for the Big Brother show. So, every time (weekly live evictions) I have many things to pack,” Diana complained, “but I prepare by packing, eating, and getting dressed up so I can look good for you, Ebuka and the viewers,” she said.

One of the evicted housemates, Giddyfia, 24, came into Biggie’s house and immediately became the funny guy.

Last week after Amaka was evicted from the show, Big Brother told the housemates that they were all up for possible eviction except for the Head of House, Dotun, and the riders Rachel and Chizzy.