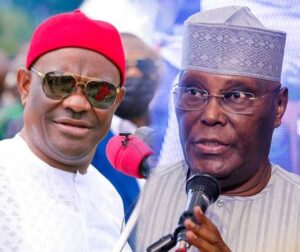 The presidential candidate of the Peoples Democratic Party (PDP), Atiku Abubakar, and Rivers State Governor, Nyesom Wike, have agreed to set up a joint consultation committee to iron out issues.

Naija News reports that this was the outcome of their first face-to-face meeting held on Thursday at the private residence of Professor Jerry Gana, a member of the party’s Board of Trustees (BoT).

A source disclosed that Atiku and Wike agreed to set up a joint consultation committee of equal persons to address the issues.

According to the source, this should be done between now and next week, after which they are expected to brief the various organs of the party.

“This is the first step towards the setting up of our Presidential Campaign Council.

“Very, very soon, all these challenges will be behind us, and the ruling All Progressives Congress, APC, will know their time in office is up for good,” the source told Vanguard.

However, a source in Wike’s camp disclosed that loyalists of the Rivers State Governor have all agreed to remain in the PDP, stating that their interests will be best served in the main opposition party.

YOU MAY ALSO LIKE:   NSCDC Operatives Killed By Terrorists In Benue

“Our principal is yet to brief me. But I know whatever decision he takes, he will reach out to us, and we will collectively decide the way forward.

“We all agreed at our meeting that our collective political interests will be better served in the PDP.

“The party belongs to all of us what transpired before and after our primary is behind us now,” the source said.

YOU MAY ALSO LIKE:   BREAKING: Sergeant Guns Down Six Colleagues At Police Headquarters In Maiduguri

Naija News reports that Atiku and Wike had fallen out after the PDP presidential candidate selected Governor Ifeanyi Okowa of Delta State as his running mate.

Following Atiku’s decision, Wike and his loyalists have reportedly demanded the resignation of the PDP National Chairman, Senator Iyorchia Ayu, accusing him of bias during the party’s presidential primary.