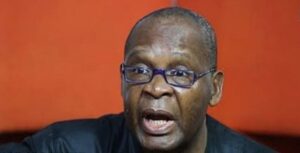 The 65-year-old Nnewi born politician; Joe Igbokwe has defended the national leader of the All Progressive Congress, Bola Tinubu following the accusations from the IPOB leader, Nnamdi Kanu. In a viral video circulating on social media, Nnamdi Kanu was seen making claims that Bola Tinubu had ordered Yourba youths to burn down Alaba International market so the blame can be placed on IPOB.

YOU MAY ALSO LIKE:   (Video) Shocking! Pregnant Woman Dies After Falling Off Delivery Bed In Delta

Joe Igbokwe, the special adviser to the present Lagos State Governor, Babajide Sanwo-Olu on Water Resource and Drainage released a statement on Facebook. The Nigerian politician appealed that Nnamdi Kanu should not attempt to bring his madness to Lagos as a result of his false news.

In Joe Igbokwe’s words, ‘Our attention has been drawn to Nnamdi Kanu’s video circulating on social media that Asiwaju Bola Ahmed Tinubu has asked Yourba youths to burn down Alaba International market and blame it on IPOB. This is a lie from the pit of hell.’

YOU MAY ALSO LIKE:   FIRSTBANK ENHANCES PALLIATIVE MEASURES, PROMOTES e-LEARNING FOR NIGERIANS

Joe Igbokwe also added that, ‘As leader of Ndigbo in APC in Lagos and South West Nigeria, I am appealing to Nnamdi not to bring his madness to Lagos or anywhere in the South West and even Northern Nigeria.’

The APC politician, Joe Igbokwe for a while has been an opposing force against the activities of IPOB and ESN. Share your thoughts about his reaction as he defends Bola Tinubu.

Previous SHOCKING: See What IPOB members did to residents who disobeyed ‘Sit-at-home’ order
Next Bello-Koko: A Vision That Turned Around NPA By Olatunbosun Olupitan