Home / cover / Bello-Koko: A Vision That Turned Around NPA By Olatunbosun Olupitan

Bello-Koko: A Vision That Turned Around NPA By Olatunbosun Olupitan 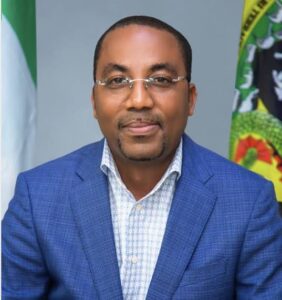 Though the acting Managing Director, Nigerian Ports Authority (NPA), Mr. Mohammed Bello-Koko is yet to reel off his plan of action after his appointment weeks back, sources close to the new boss atthe Nigerian sector regulator have hinted on some aspects of his job that he hopes to put in the front burner.

Basically, with his appointment, Bello-Koko is saddled with the sole responsibility of overseeing operations at the NPA, which include, administration of land and water within port limits, planning and development of port operational infrastructure, leasing and concession of port infrastructure and setting benchmark for tariff structure, carrying out nautical/harbour operations and hydrographic survey, handling marine incidents, avoiding pollution, maintaining safety and security, enacting port regulations and byelaws as well as monitor and enforce while superintending the day-to-day operations and enforcement of relevant sections of respective agreements.

A stickler to rules and regulation himself, paramount on Bello-Koko’s agenda is the need to embark on stricter regulatory re-enforcement. He hopes to ensure that every operator in any of the Nigerian ports play by the rule, believing that it is only by so doing that the ports could be optimally utilised and more funds remitted to government’s coffers. There will also be firm regulatory oversight for sea vessels cargo movement.

The acting MD is familiar with the problems of maritime insecurity and during a recent visit to him by members of the Support for West African Maritime Security (SWAIMS), an affiliate of the European Union, at the NPA head office in Marina, Lagos, he reckoned that maritime insecurity had heightened hence the need to tackle the matter frontally. Urging the SWAIMS team to diligently concentrate on the theme of their operation, he assured them that the NPA would always identify with.

Successive NPA leaderships have made efforts to address the issue, but it has remained a recurring decimal, making the Nigerian seaports rank among the most dangerous maritime zones, where pirates, kidnappers and other sea robbers freely operate. This has denied Nigeria its membership of category C of the International Maritime Organisation (IMO) during its elections in 2017, 2018 and 2019.

Apart from the surcharges and high insurance premiums that this problem brings about, some foreign vessels have opted to divert their cargoes to much safer neighbouring countries or limit their voyages to the Lagos ports, which is relatively safer than most other ports in the East and South-south.

Before his emergence as acting MD, Koko-Bello always harped on the need for a safer maritime environment. One of such examples was during a visit of the federal government’s team for the implementation of the Harmonised Standard Operating Procedure on the arrest, detention, and prosecution of offenders in the maritime environment, to the NPA corporate headquarters in Marina, Lagos, where he spoke on behalf of his former boss. On that occasion, he noted that a safe and secure environment as well as restored sanity at the anchorage were factors that could help generate more funds for Nigeria.

The Bello-Koko leadership hopes to ensure vigilance at the ports, train and retrain its security personnel and ensure that terminal operators/concessionaires remain complaint to dictates of the International Ships and Port Security (ISPS) code and there will be regular monitoring and supervision to ensure compliance.

Another vision of the NPA boss is to facilitate inter-agency and stakeholders’ collaboration, especially,relevant security agencies and host communities to engender safe and customer-friendly operating environment. These include the Nigerian Customs Services (NCS), which facilitates legitimate trade, the Port Health Services, which implements the WHO International Health Regulations, the International Maritime Organiastions (IMO) laws on health matters, the International Civil Aviation Organisation (ICAO) laws, the Nigeria Quarantine Act (aircraft and ship), the Public Health Laws of Nigeria and any other relevant laws and the Nigerian Police, which responsibility is to maintain law and order in the ports.

One other agency that must work in synergy with others are the Nigerian Maritime Administration and Safety Agency (NIMASA), established to oversee maritime safety, seafarers’ standards and security, maritime labour, shipping regulation, promotion of commercial shipping and cobatage activities, pollution prevention and ensure control in the marine environment. The agency is also responsible for the implementation of domesticated International Maritime Organisation (IMO) and International Labour Organisation (ILO) conventions.

The Department of State Services (DSS), responsible for intelligence gathering and protection of government concerns, National Agency for Food and Drug Administration and Control (NAFDAC), with a mandate to regulate and control the manufacture, importation, exportation, distribution, advertisement, sale and use of food, drugs, cosmetics, chemicals, detergents, medical devices, and other regulated products and the Nigeria Immigration Services (NIS), charged with detecting fraudulent travel documents, border patrol and control of the seaports, are expected to explore more innovative techniques to work together to make the seaports safer.

One problem that operators have had to contend with is the menace of illegal barge operators. Barge operators under the aegis of Barge Operators Association of Nigeria (BOAN), have called on successive administrations at the port to get to the nitty gritty of quack barge operators on the waterways. So, expectedly, the new leadership plans to address how they get access to the ports to load their cargoes and how they get jetty approvals to operate, with the hope to regulate their activities.

There are so many other sundry issues that will top the agenda of the new NPA MD, and this will include, but not limited to cleaning up the system and ensuring transparency in port operations, dredging of the channels and removal of wrecks for safe navigation of vessels to make channels navigable, completion and full deployment of functional information and communication technology to drive the operations at all locations, continued automation of port authority operations to facilitate speedier processes, reliability and trust in the system, and very importantly, closing the gap between funds generated and remitted to government coffers.

YOU MAY ALSO LIKE:   Suspected Ritualists Kill 65-Year-Old Woman, Remove One Eye

The Lekki and Ibaka deep seaports are projects started by former managing directors of NPA. The $1.6bn project is already at 50 per cent completion, so Bello-Koko is determined to continue from where previous MDs stopped. He obviously would muster the needed political support and work with government to see them become operational. This will also give him the opportunity to take the credit for their commissioning as Nigeria begins to take advantage of the world-class port complex and welcome deep-sea vessels.

Talk of the Lagos ports and what quickly comes to mind is the horrendous traffic gridlock that usually spills over to the major arterial roads in the metropolis, affecting the economy of the state and the country at large. Therefore, Bello-Koko’s plan is to see to the full implementation of the Eto, the Electronic Truck call-up system designed for the management of truck movement and access to and from the Lagos ports complex and the Tin Can Island ports, Apapa, Lagos.

Therefore, all trucks doing business at the ports would have to stay at the approved truck parks until they are called up into the port through the Eto app, which is being used for the scheduling, entry and exit of all trucks since February 27, 2021.

Coming into office from his position as the former ED Finance, a position that puts the welfare of NPA employees and pensioners under his control, port workers and pensioners can rest assured that top on his agenda is to ensure smooth and cordial relationship that would be founded on ensuring that their welfare is priority.