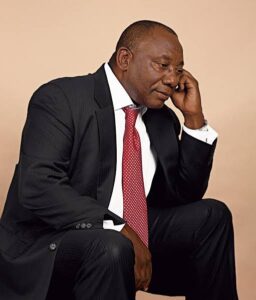 His government tweeted on Monday that the President being “booked off for the week, there won’t be a weekly message issued today.”

In a press statement published on the government’s website, he is receiving treatment for mild COVID-19 symptoms after contracting the virus on Sunday, 12 December 2021.

The South African presidency revealed that Ramaphosa had authorized his vice to deputize for him.

“The President, who is fully vaccinated, is in self-isolation in Cape Town and has delegated all responsibilities to Deputy President David Mabuza for the next week,” it added on Sunday.

The presidency explained that his covid-19 test results were negative when he visited Ghana, Nigeria and other countries.

YOU MAY ALSO LIKE:   Mixed Reactions As Nigerians mock President’s Igbo attire

“On his recent visit to four West African states, President Ramaphosa and the South African delegation were tested for COVID-19 in all countries.

“The President and the delegation returned to South Africa from the Republic of Senegal on Wednesday, 8 December 2021, after obtaining negative test results. The President also tested negative on his return to Johannesburg on 8 December.

YOU MAY ALSO LIKE:   Buhari regime forcing us to go on indefinite strike: ASUU

“Today’s proceedings in Cape Town were undertaken in compliance with health regulations pertaining to hand hygiene, the wearing of face masks and social distancing.”