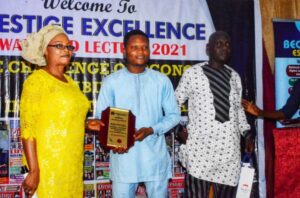 The publisher of www.trixxng.com, Osho Oluwatosin has been honoured with the blogger of the year award at the recently concluded fifth edition of Prestige Excellence Award.

The event which held on Sunday, 28th of November, 2021 at the prestigious Presken hotel had several dignitaries that include Governor Babajide Sanwoolu, Rt Hon Mudashiru Obasa, Hon Lanre Odubote, Buba Marwa, Babajide Otitoju, captains of industry and important personalities from different walks of life in attendance.

According to Mr Wale Abiodun, the organizer of Prestige Excellence Award, Osho Oluwatosin was selected as the blogger of the year due to the sagacity, intelligence, and consistency he has used to make TRIXX NG a force to reckon within a short period of time.

Mr Wale Abiodun made special reference to TRIXX NG’s rank in Nigeria and globally, while commending Osho Oluwatosin for putting lots of efforts to attain such a huge feat.

In his reaction, Osho Oluwatosin appreciated God and the organizers of Prestige Excellence Award for counting him worthy of such a huge award.

‘’I want to appreciate Mr Wale Abiodun for counting me worthy of this huge award. It’s not something I take for granted especially for the fact that it will be my first career award. I thank God for the progress experienced in my career so far, it has all been by his grace alone’’

‘’ I want to specially appreciate Mr Femi Oyewale, the publisher of Sahara Weekly Magazine/Online who was the first person I met when I decided to delve into journalism. I had my industrial training with his media outfit and he took me as a son. Without him, I would not have gotten to this stage of my career’’

YOU MAY ALSO LIKE:   MURIC gives condition for establishing courts for Christians

‘’TRIXX NG is a platform I see as a calling, it’s my ministry and I have no regret starting www.trixxng.com in 2018. I appreciate our readers, supporters, friends who have been pushing for us out there, God bless every one of you, Amen’’