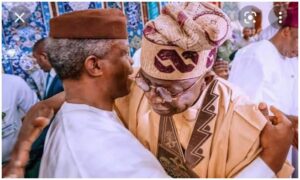 Veteran journalist, Mustapha Ogunsakin has claimed that Vice President Yemi Osinbajo rejected the chance to become Nigeria’s Attorney-General and Minister of Justice under the administration of ex-President Olusegun Obasanjo.

The journalist stated this on Friday amidst claims that Osinbajo has betrayed his benefactor and national leader of the All Progressives Congress (APC), Bola Ahmed Tinubu, for declaring to contest in the 2023 presidential election.

Ogunsakin claimed that Obasanjo offered Osinnajo, who was then Lagos State Commissioner of Justice, the AGF role in 2005 but Nigeria’s vice-president rejected the offer out of loyalty to Tinubu.

YOU MAY ALSO LIKE:   Tinubu’s Camp Speak On Alleged Pee On Cloth

He said: “In 2005, President Obasanjo invited Osinbajo to take appointment as the Attorney-General of the Federation after Chief Akin Olujimi left office. Obasanjo saw the sterling qualities and performance that Osinbajo had as Attorney General of Lagos.

“The president without informing Bola Tinubu, the then Lagos State Governor, offered the post to Osinbajo who was then Lagos State Attorney-General. The first thing Osinbajo did was to inform his principal, Tinubu, who gave him a free hand to take his decision.”

According to the veteran journalist, Osinbajo asked Obasanjo to release the withheld Lagos State Council funds before he accepts the offer.

YOU MAY ALSO LIKE:   BREAKING! Sanwoolu Appoints MC Oluomo As Chairman Of Lagos Parks Management

But Obasanjo asked him to first take the appointment and then advise him as Attorney-General of the Federation on the matter.

Ogunsakin said: “Osinbajo went underground and for weeks Obasanjo could no longer reach him.

“It was obvious to the then President that Osinbajo deliberately avoided him; he went on to appoint Chief Bayo Ojo as his Attorney-General of the Federation and Minister of Justice.

YOU MAY ALSO LIKE:   2023: Buhari Will Never Jump The Gun In supporting anyone’s presidential ambition – Presidency

“Osinbajo rejected the position of Attorney-General of the Federation and Minister of Justice and stayed with Tinubu; nobody complained then.”

While cautioning those calling Osinbajo a betrayer, Ogunsakin said the VP not only stood with Bola Tinubu, but stayed loyal to Lagos State.