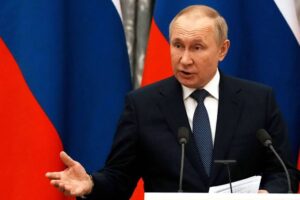 A Russian State television has announced the beginning of ‘World War III.’

The Kremlin’s main propaganda mouthpiece revealed how the flagship of the Black Sea Fleet was defeated.

Olga Skabeyeva, a leading propagandist for Vladimir Putin told viewers that Western support for Ukraine amounted to direct conflict with Russia, saying: ‘What it’s escalated into can safely be called World War Three. That’s entirely for sure.

‘Now we’re definitely fighting against Nato infrastructure, if not Nato itself. We need to recognise that.’

“And the West has long been preparing for the war”.

Anchor Olesya Loseva, host of Vremya Pokazhet, told her viewers that the West was providing “zillions of weapons” to Ukraine.

She stated that Ukraine was doing the West’s bidding by carrying out “yet more provocations, bloody, horrible, completely unthinkable.”

YOU MAY ALSO LIKE:   Just In: NDLEA Arrest Popular Lagos Politician With Cocaine At Lagos Airport

These will “force people to shudder once again and say that Russia Is a country which is unworthy of even being on the world map and that all Russians should simply be wiped off the face of the earth”.