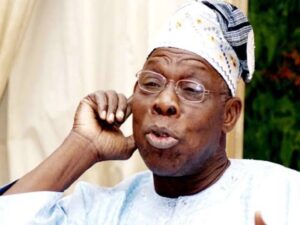 Obasanjo gave the advice at an event organised to honour Nteranya Sanginga, director-general of the International Institute for Tropical Agriculture (IITA), and his wife, Charlotte, with the chieftaincy title of Aare and Yeye Aare Afurugbin-Ola over the weekend.

The event which held at the palace of the ooni in Ile Ife, Osun state, drew huge personalities and became an opportunity for political engagement towards the 2023 elections.

The Ooni is a known friend of president Muhammadu Buhari and gave his endorsement to the president in 2019.

Obasanjo, whose presentation at the event touched on political issues, advised Ooni and other Yoruba traditional rulers to reduce their open declaration of support for those vying for political offices as that has the potential to also push their subjects into supporting such contestants.

He advised Ooni that as a father to all, politicians will approach the monarch for support, but the best he should do is to “pray for such a person and let him go”.

In his words, “All the sons and daughters of Yorubaland, no matter where they are or their standpoint, will come to meet you. This is expected because you are the father of all,” Obasanjo said.

According to him, differences in political idea, affiliation, direction and aspirations are reasons while traditional rulers should limit their open support so as not to be seen to be partisan.

It has become a usual practice where office seekers visit traditional rulers for their blessings and often seek their endorsements.

Obasanjo therefore advised: “Don’t direct Yoruba people to support any aspirant, as we don’t all go in the same direction, which is part of our strength in Yorubaland.”