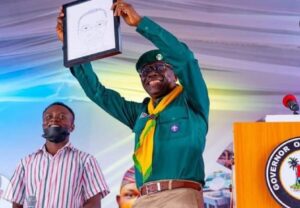 The Governor of Lagos State, Babajide Sanwo-Olu has received an artwork which he said he cannot lay claim on.

But Sanwo-Olu disclosed on Tuesday that he will support the artist and other young talents in his state.

He said through his Instagram account that to support the younger generation, there are plans to introduce fashion and entertainment to the state’s school curriculum.

Sanwo-Olu said, “The best artist in UAR came to present his drawing to me. I honestly can’t lay claim to the person in the frame, but I lay claim to the fact that we will continue to support and encourage our talented youths in Lagos state.

“We are adding fashion and entertainment to our school curriculum. P.S. He wasn’t arrested.”

The drama began when Bodataiye Oniyakuya [@bodataiye_oniyakuya] posted on his Instagram page that he made a portrait of the governor.

He said, “I drew his excellency, the governor of Lagos State @jidesanwolu, I thank God for the successful work. I think his excellency will love it. I still remain the best artist in UAR.”

In response to the portrait, Sanwo-Olu through his official instagram page asked the artist to present his work to him at his office.

YOU MAY ALSO LIKE:   VIDEO: How Singer, Teni Escapes Alleged Kidnap Attempt During Her Performance In Rivers

Meanwhile, the artist had announced his intention to draw the governor days before the drama.