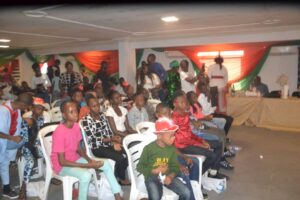 The city of Lagos was set agog when Dreamfo Foundation gathered more than 300 widows, widowers’ children to throw a lavish special Xmas party and to allow the children to showcase their God’s given talents in the areas of modeling, fashion parade, songs/musical showbiz and dancing competition.

As organised, each category has first and second runner-ups and attached with reasonable, commendable and laudable prizes.

It was a gracious moment when the chairman committee for the programme, Olugbenga Sholarin engaged Oluwaseun Fabiyi, publisher of BethNews Media in a brief discussion. He said this stands as first event Dreamfo Foundation will be organising for Widows widowers Children in Nigeria, especially in Lagos. Saying further, it is necessary we cater for our children and always make them happy.

Mrs Olubunmi Ojo Afolabi a quintessential woman of repute and selfless service/support woman to humanity is the founder of Dr. Olusegun Afolabi Memorial Foundation (Dreamfo). She hails from Akure in Ondo State Nigeria and was married to Dr. Olusegun Emmanuel Afolabi for eleven years before his demise as a result of cancer some years ago.
Olubunmi, holds a B. Eng. degree in Mechanical Engineering from Ondo State University,Ado Ekiti, Msc Information Technology from University of Greenwich in London and another Msc in Social work from London Metropolitan University.

During a phone conversation with Oluwaseun Fabiyi, her media consultant/publicist she described Dreamfo Foundation as an international organisation registered in Nigeria and known as one of the reputable charity foundations aimed at empowering widows, widowers and less privileged who seem to have lost their hopes of survival as the foundation has just demonstrated its great passion and relentless efforts to show kindness and to put smiles on the faces of some Lagos widows, widowers by gathering over 300 of their children for talent hunt to showcases their God’s given talents.

The memorable children Xmas fun/talent hunt was graciously attended by the parents of the participants, some dignitaries including five panel of judges who are Dr. Kunle Hamilton, Age Anthony, Ola Onabajo, Tosin Faleye and Sunday Adeyemi.

“We look forward to always Celebrating widows, widowers children at all cost and to do more in the years to come.” Olubunmi Ojo Afolabi added.