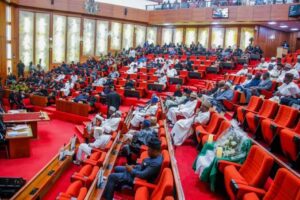 A screengrab taken on October 12, 2021, shows some lawmakers during plenary in the Senate chamber of the National Assembly in Abuja.

The Senate has gone into a closed-door session a day after reports emerged that President Muhammadu Buhari had declined assent to the Electoral Amendment Bill.

A source told Channels Television that the lawmakers are discussing President Buhari’s letter to them in which he explained his refusal to sign the bill.

Senate President Ahmad Lawan is expected to read the President’s letter during the plenary session on Tuesday.