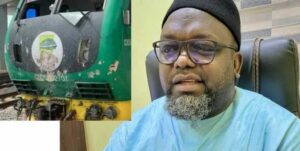 The residence of Tukur Mamu, a negotiator with the Kaduna Train terrorists has been invaded by operatives of the Department of State Services (DSS).

The operatives reportedly invaded his residence in the early hours of Thursday and left with documents, phones and laptops.

Daily Trust reports that the members of his family within the apartment were asked to sign documents they did not read before carting them away.

Mamu, who was arrested in Cario, Egypt was indicted over ransom racketeering and relationship with terrorists in the northeastern extremity of Egypt.

But Mamu upon his arrest on Wednesday and immediate deportation accused the Federal Government of orchestrating his arrest with claims he was only on his way to Saudi Arabia for lesser Hajj with his wives, eldest son and brother-in-law.

Recall that Mamu, came to the limelight after he made public his involvement with the terrorists that abducted the inbound Kaduna train passengers, negotiating their release.

Although there were speculations of outrageous ransoms paid by families of victims, Mamu had constantly debunked such reports, with claims that all releases by terrorists were achieved through dialogue.

Mamu had collected huge sums running into billions for terrorists with some of the payments made in foreign currencies by families and negotiated the release of their loved ones.

Previous We Will Ensure ‘Made In Nigeria’ Products Are Available In Paris, England, Others– Firm
Next African Researchers hold Symposium on Africa’s Development