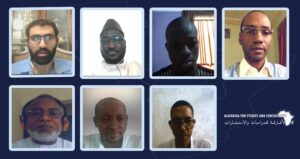 A group of African researchers under the name Alafarika for Study and Consultancy had recently on August 26 and 27, 2022 organized a virtual symposium titled “Knowledge Creation and Dissemination in Africa”, which researchers in African affairs from Morocco, Nigeria, Mali, Mauritania, Egypt, and the Central African Republic participated to come up with model for African Development. The participants commended the initiative for giving great importance to knowledge, its creation and dissemination, and considering it an initial and basic building block for developing and progressing in Africa.

The two-day session which dealt with a series of issues related to influencing African policy and politics with knowledge, the process of knowledge management for development; the role of the media in creating knowledge societies; and the challenges facing academic publishing and its potential solutions. The symposium also touched on the relationship between philosophy and human development in the African context and how revolutions and movements demanding change can be directed based on the knowledge that provides answers to the state-building and development that the continent needs in the twenty-first century and the digital age, in addition to the potential of investigative and data journalism to contribute to Africa’s prosperity.

Talking about creating knowledge societies and influencing African politics, the speakers revealed that consultancy institutions are one of the means of influencing knowledge creation processes if these institutions are rooted in local issues and are experts in initiatives that touch the needs of the population and citizens. The speakers stressed that civilizations and advanced societies throughout history have depended on knowledge and actors in disseminating human sciences. Despite the lack of interest of some current African governments in knowledge, its means and tools for its dissemination, the history of Africa, its civilizations and kingdoms in different regions confirmed that Africa has rich experience in this regard. What is required today is to study these historical achievements and support the creativity of young people that may limit the brain drain in many African countries, in addition to attaching the utmost importance to educational institutions and their outputs.

They stressed that knowledge management is a necessary process for development because it relates to many sensitive areas and is an essential means of successful management and that it elevates knowledge to the forefront of any government or political system’s success by emphasizing the knowledge capabilities of individuals, universities, and research institutions that facilitate access to knowledge, participation in it, distribution, preservation, and retrieval.

Talking about the impact of globalization and the rapid technological change in human societies, the speakers make knowledge the basis of domination and influence. Stating that all indicators show the strength of tomorrow’s world will be determined by the interest in human capital and the exploitation of the energies and capabilities of the continent’s population in sustainable human development. In terms of knowledge management and development, they are of the belief that there is a need to move from theories to real-life applications to meet the challenges of the continent and the rapid transformations in all fields without neglecting data technologies, which collect and categorize information to enable users of knowledge systems and services to access them when necessary. Pointing that all of these can be achieved through interviews and dialogues with experts and actors in national development policies, humanities, and modern methods that reflect positively on African societies and enable African countries to compete globally.

African Media Institutions are tasked with the process of creating knowledge society at a time when global media ignore the role of Africans in crystallizing global knowledge and the information explosion, without overlooking the fact that digital media plays some of the roles of traditional media, influencing different African societies and stages. Media roles are however agreed not be limited to the use of various means to highlight developments and experiences in African countries, their civilizations and history or to publicize their tourism sectors. Taking the information revolution and technological innovations the continent’s youth seize today in Nigeria, Kenya, South Africa, Egypt, and other African countries to develop the financial, agricultural, and health sectors into consideration, the relationship between the media and the dissemination of knowledge shows a relationship of mutual influence that can be observed in concepts related to human values, the crucible of communication and understanding.

Another means of developing and changing society is the process of scientific research and academic publishing. It was also agreed that one of the tools through which sustainable development can be achieved thereby addressing the challenges facing academic publishing in Africa and the weak governmental attention to the results of research projects and recommendations of conferences and research sessions that may contribute to promoting development.

While one of the crisis facing academic publishing in Africa is lack of publishing and distribution centres for works, academic books, and scientific journals within Africa, without forgetting that education curricula and teaching methods in several African countries are rooted in the colonial era and ideas that strengthen Western scientific institutions while weakening African scientific institutions that are already short of the necessary infrastructural resources.

Speakers in the “Knowledge Creation and Dissemination in Africa” symposium also pointed out that African philosophy can help us understand the problems facing the creation of knowledge and enhance the patterns of knowledge production that the continent needs. Furthermore, studying African history and philosophy may determine the African position towards modern science and contemporary issues, especially since knowledge based on African philosophical foundations may transform African societies into freer societies and can provide answers to the most important factors contributing to political, social, and economic inequality.

YOU MAY ALSO LIKE:   Female Presidential Aspirant, Khadija Okunnu-Lamidi Reveals Her Relationship With Tinubu

The COVID-19 crisis has shown the repercussions of the lack of independent and effective scientific research, sufficient scientific and technological resources, and the lack of manufacturing capabilities in the global south in general and Africa in particular. As a result, most African health care systems relied on the so-called “goodwill” of the global north and foreign vaccines.

YOU MAY ALSO LIKE:   WEARING OF MILITARY UNIFORM BY UNAUTHORISED PERSONS AND POLITICIANS FOR ELECTIONEERING CAMPAIGN POSTERS IS ILLEGAL

The symposium also highlights that recent protests and political transformations in Africa indicated that most movements calling for change were not based on knowledge foundations that meet the state-building processes Africa needs in the twenty-first century. This is despite the fact that between 2005 and 2014, 40 out of 54 countries on the African continent witnessed widespread protests and uprisings in their various forms at the local and national levels. The knowledge equation lies in the repeated mistakes of these movements and that some of these uprisings often exacerbate the situation in the countries where they occur. Knowledge gaps can also be seen in the ideologies and parties that refuse to bring about the continent’s desired social and political changes.

In conclusion, the participants praised the role of investigative and data journalism in promoting African prosperity based on knowledge, as data and statistical information should contribute to achieving good governance and revealing corporate and institutional corruption and social injustice, in addition to presenting powerful and influential stories and revealing the truth. Thus, data is a mirror to confirm or deny a particular phenomenon or issue and a means of exploring its direction and foreseeing its future trend.