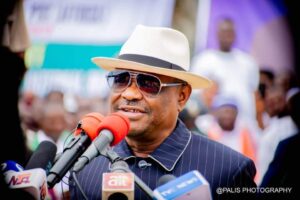 – As Rivers, Oyo, Abia Governors, Others Boycott NEC Meeting
The resignation of Walid Jibrin as the Board of Trustees (BoT) chairman of the People’s Democratic Party (PDP) has not deterred Governor Nyesom Wike from continuing with his attack on the party.

This comes as the Rivers Governor has vowed to continue to “fight” until the party serves justice by asking its chairman, Iyorchia Ayu, to step down from his position.

YOU MAY ALSO LIKE:   Tukur Buratai: Past performance produces present privileges By Femi Oyewale

On this ground, the Rivers governor demanded Ayu’s resignation as a condition to support the party’s presidential candidate in 2023.

But in an apparent move to shut Wike up, the party’s BoT Chairman who also hails from the north volunteered to step down from his position for peace to reign.

Unsatisfied by the move, Governor Wike during the commissioning of the Rivers State University’s Ahoada Campus in the Ahoada East Local Government Area said “This fight we will fight it to the end.”

Meanwhile, some southern governors among whom have shown loyalty to Wike in the matter did not attend PDP NEC meeting.

They include governors Okezie Ikpeazu of Abia State, Seyi Makinde of Oyo, Ifeanyi Ugwuanyi of Enugu, and Udom Emmanuel of Akwa Ibom.

YOU MAY ALSO LIKE:   NASS Rejects Special Seats For Women, Inclusion Of VAT On Exclusive List
‘We Will Fight To End’ — Wike Brushes Off PDP BoT Chair’s Resignation 2022-09-08
Oluwasegun Adesuyi
Share

Previous African Researchers hold Symposium on Africa’s Development
Next Residents In Shock As Remnants Of A Decomposed Body Of A Man Reportedly Found In His Bedroom After Four Years In Apete, Ibadan.