Edo 2020: It’s Time for a Debate By Francis Ugwuanyi 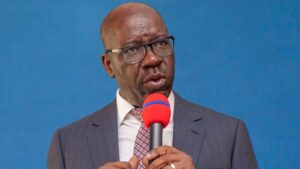 Were debates a constitutional requirement of every election in Nigeria, it would have been interesting to watch Governor Godwin Obaseki of the Peoples Democratic Party (PDP) square up to Pastor Osagie Ize-Iyamu of the All Progressives Congress (APC), his main rival in the September 19th governorship election in Edo State.

As governor for the past three years, such a debate would have availed Obaseki, particularly, a veritable opportunity to let the world into his achievements and sell himself to the people for re-election. But, as yet, there is no such plan.

This election is pivotal on so many fronts. It is not just about the direction that the state would take after the end of Obaseki’s current administration; it is more about its future and essence; how it would rally from the doldrums and compare on all fronts with other big states in Nigeria.

It is a contest between light and darkness, literally; between a rudderless incumbent and a major opposition figure that had long prepared for the seat; and most importantly, a contest that determines whether the people are genuinely committed to making a complete break from a dreary past and destructive party that had underdeveloped them in the past; or reinvesting their hope in the party that had come to their rescue since 2008.

Will the people allow the prodigal Obaseki to take them back to that ugly past?

This is why there should be a debate to know the mindset and mission of the standard-bearers of the two leading parties, not just lap up their ringing sophistry and colourful manifesto that cannot be critically questioned or dissected. Edo people cannot afford a gamble any more. But, even if there were a debate, would Obaseki have shown up?

His absence would not be for want of eloquence. Far from it! Obaseki is luckily blessed with a luxuriant, accented drawl that would be a draw in the boardroom. The well-founded assumption that he would not attend is predicated on his sudden imperious predilection, which would see him wanting to control the ground rules, determining the moderator and being confident that he can avoid probing questions about his alleged maladministration in Edo State.
If he were perceptive enough, however, he should have, by now, reconciled with himself that there is a distinctly palpable and pervasive lack of enthusiasm for and confidence in his ability to discharge his duties very well as governor.

And, given his unconstitutional handling of the Edo House of Assembly’s inauguration, there is a belief that Obaseki might resort to yet, another round of filibustering to avoid a debate knowing that he would be in grave peril of getting called out for not answering questions appropriately; being fact-checked real-time and finding no place to hide, when asked about his serial failures that have become even more obvious as the local economy has gone into a tailspin.
Interestingly, the buoyancy of the Edo economy was the strength on which he was piggybacked into the Governor’s Office in 2016. Upon his inauguration in 2008, Comrade Adams Oshiomhole had embarked on and implemented an ambitious, highly successful statewide programme of road construction and repairs in Edo with a view to re-jigging the economy.

True to his vision, within eight years of his stewardship, over 25 major companies had set up in Edo State with the concomitant provision of jobs and reinvigoration of the local economy. There is notably the $1billion Azura power plant, a Chinese steel and ceramic industries, and the Okpella Cement Company by the Dangote Group also valued at over $1billion among others.

Though blithely Nigerian, the nation’s foremost industrialist, Alhaji Aliko Dangote, would probably not have considered Edo State to site such a monumental project, he however did, because, according to him, “It is a friendly state to invest.” Dangote said at the groundbreaking ceremony of the cement company in 2016, that this was attributed to the economic reforms of Oshiomhole especially, in the area of tax, innovations in rural finance and investment in infrastructure as factors that necessitated an enabling environment that has further provided a platform for future growth.

YOU MAY ALSO LIKE:   75 Ogun Inmates Become Pastors, Bag Diploma In Theology

While attributing the influx of investors to the favourable business environment and government policies among others, Oshiomole had noted then that more indigenous and international investors have indicated interest to invest in the state. This stance explained his plunging headlong into the Obaseki for Governor Project in 2016.

Desirous to make Edo even more economically viable, Oshiomhole swore by Obaseki as his successor, vowing that he (Obaseki) would consolidate on his achievements and do even better and the people believed him, because he under-promised during his electioneering and over-delivered.

Who’s better to take the state economy to Nirvana if not Obaseki? Rather, after being entrusted with power, he plunged the entire state into the Nadir. Now, his story is insipid and tedious and deserving of a better ending than this self-induced ugly turn.

For the records, there was no encumbrance on his ascension to the governorship and the people, who made it so did not expect any during his administration. But Obaseki threw every sense of purpose, of governance and logic to the birds as he embarked on a purely anti-people government – fighting every phantom foe rather than working; commanding rather than consulting, and unearthing the worst impulses of the people and wrecking the fabrics of the local economy.

Yet, Obaseki’s story was once beautiful. With a background in investment banking, he was appointed the Chairman of the Edo State Economic and Strategy Team inaugurated by Oshiomole in March 2009. He served well and to the best of his ability and was an integral part of some of the economic reforms initiated and implemented by the Oshiomhole administration. He was unassuming, yet, very efficient and loyal. Indeed, a part of the Oshiomhole success story.
So, during a potential debate, the economy will prove decisive, specifically, how large-scale unemployment and underdevelopment were inflicted on the state as a result of his seeming incompetence and directionless administration?

YOU MAY ALSO LIKE:   Just In: Alaafin Of Oyo, Oba Lamidi Adeyemi, Is Dead

Where is the Edo economy now and from where did Obaseki take it? What has he done with the allocations coming into the state in the last three and a half years? These are questions he might not be able to answer.

Unfortunately, his MEGA (Make Edo Greater Again) Agenda, which teed-off to a false start, because the name itself was stolen from President Donald Trump’s 2016 presidential slogan, Make America Great Again, does not elucidate how he hopes to revive the economy he asphyxiated.

Also, ironic is that the MEGA Agenda claims that, it is focused on a modern and progressive Edo State, where every citizen is empowered with the opportunity to live life in its fullness while his mission is to achieve economic prosperity for Edo State. This particular point rankles. Why does Obaseki need another four years to achieve this? What did he do with the first four years of his administration?

He would also describe the MEGA Agenda as a mass movement of campaign for popular participation of the Edo people for development, yet, his few rallies have been boycotted outright or sparsely attended if not defined by violence; and if you did a headcount, attendees are only members of the party, who had come to feast on their common patrimony.
Shall we have the debate now, please?