Ekweremadu: ’15-year-old’ May Have Lied To Escape Buhari’s Nigeria – Kperogi 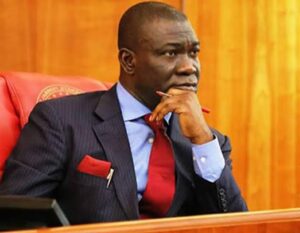 Journalism professor Farooq Kperogi has stated that David Ukpo, an alleged 15-year-old boy, may have lied against former Senate President Ike Ekweremadu to seek asylum in the United Kingdom.

Ekweremadu and his wife, Beatrice, are currently in jail in the UK for allegedly bringing David into the country with the intent of harvesting his organ.

However, images purportedly to be the passport of David have been making rounds on social media, indicating that the young man is not a 15-year-old.

Reacting in a post on his Twitter page on Friday, Kperogi wrote: “Ekweremadu: Ukpo is Lying About Being 15 years old.

“David Ukpo, who initially agreed to donate his kidney to give Ike Ekweremadu’s sick daughter, Sonia, a chance to live, isn’t the 15-year-old kid he told British authorities he is. He was born on Oct. 12, 2000.

“That means he’ll be 22 years old in October this year, as his passport and BVN data show. (The passport & BVN data have been doing the social media rounds, but I’ve decided to conceal the numbers to protect his privacy).

“He was also not smuggled into London, as Ekweremadu’s December 28, 2021 visa
application support letter to the British High Commission shows. I dislike Ekweremadu, the politician but empathize with Ekweremadu, the father.

“As the father of 3 girls, I’ll do anything I can to save my daughters from death. That’s all this is about. Nothing more. So far, the evidence seems to be pointing in the direction of the possibility that 21-year-old Ukpo, upon arriving in the UK after agreeing to donate his kidney to Sonia, changed his mind & decided to seek asylum by claiming to be a 15-year-old child who’s trafficked to London for organ harvesting.

“If that turns out to be true, that would be a horrible way to escape Buhari’s Nigeria. Cashing in on other people’s personal tragedy–and destroying them in the process–just to pursue your dream to leave Nigeria is singularly evil.”