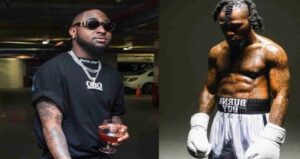 An eyewitness of a fight between Nigerian music superstars, Davido and Burna Boy, at a Ghanaian club on Monday, has said bouncers at the club ejected Burna Boy who stormed the club with six hefty men.

Earlier today, the news went round that there was a fight between Nigerian superstars, Davido and Burna Boy at a club, Twist Club and Lounge, in Ghana. In several videos that have since gone viral, Wizkid was also seen at the club drinking from a bottle seemingly unbothered by the rancour.

In an exclusive interview with The PUNCH, Steven Mingle, who is responsible for posting most of the videos about the brawl, said he was at Twist Club and Lounge, the venue where the fight occurred.

Mingle had posted clips of the fight on his Instagram handle, Ghhyper1.

He explained, “Davido was having fun with his guys; I was also there beside him taking some shots. The place got choked, so, I had to excuse myself and stayed by the door to get some fresh air.

“When I was standing by the door, I saw Burna Boy and at least six guys following him. One is a popular guy who spends in the club and the others are the muscular guys.

“When Burna Boy entered, he did not come to chill there because he just came to attack Davido. He just went straight to Davido.

“The club’s bouncers had approached them to ask where they were going but when he showed his face as Burna Boy, they allowed him.

“Davido spotted him and his look showed that he was wondering why he (Burna Boy) was coming to his table but he stood his ground. Just like boxing face-off, the next thing blows started flying; the girls and people inside Twist Lounge had to run; I also ran.”

The eyewitness further claimed that the security officers of the club immediately asked Burna Boy to leave the premises.

YOU MAY ALSO LIKE:   I am Not Certain If I will Ever Get Married, Burna Boy Reveals

“The Twist bouncers forced Burna Boy and his guys out of the premises. Even when they were going, Burna Boy hit the club gate. Davido had to wait for about one hour thirty minutes before he moved out because of security reasons.”

Mingle further told The PUNCH that he has been with Davido and his crew since they landed in Ghana on Sunday to celebrate the song Davido and ace Ghanaian artiste, Stonebwoy, recorded together ― Activate.

YOU MAY ALSO LIKE:   2023: Why the Obidient movement is a useless one - Asari Dokubo

When The PUNCH reached out to Burna Boy’s Public Relations team, it simply said, “Unfortunately we have not gotten any information yet because we are in Lagos and they are in Ghana. We have not spoken to anybody, so, we cannot really give any information on what transpired.”

@societygazette
Previous Heritage Bank powers Palm oil entrepreneur with N10m in The Next Titan Season-7
Next HOW NIGERIA’S AFROPOP SENSATION, HOLMES TURNED THE HEAT OF 2020 INTO A HIT