Home / Entertainment / HOW NIGERIA’S AFROPOP SENSATION, HOLMES TURNED THE HEAT OF 2020 INTO A HIT

HOW NIGERIA’S AFROPOP SENSATION, HOLMES TURNED THE HEAT OF 2020 INTO A HIT 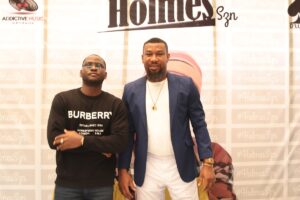 Nigeria’s talented music sensation, Umughare Aghogho Prosper popularly known as Holmes, who is fast establishing himself as one of the great artistes on the continent with his Afro-fusion genre of pleasant sound has continued to break fallow grounds in the entertainment industry, despite the challenges that hit the year 2020.

No stage performances, no gigs, no concerts, no doubt, the year 2020 came with a lot of hits for many people from various walks of life all around the world and, Nigeria’s entertainers are not left out from the heat of the covid-19 pandemic, #EndSARS protests, and the likes, but for Holmes, the heat became his ‘hits’ as this has affected his career in a positive way.

The talented singer’s focus and dedication to his music career saw him hit eight singles in a pandemic year, boasting of high profile collaborations with Ycee, Yung6ix, and multiple award-winning mega-superstar, Davido, and DJ Neptune, meanwhile, and he is nowhere near slowing down on dishing out his best in terms of good music and entertaining his millions of fans across the continent. His hard work has seen him deliver hit singles that are ruling the airwaves; Magician, Break It In January, Love, Sade, Finally, and several others.

A Native of Delta State, Warri, Holmes’ growing and amazing success story cannot be distant from the massive support from his record label, Addictive Music Worldwide and D’Luxe Management under the supervision of Franklin Amudo whose wealth of experience is contributing amazingly to Holmes’ transcendence into the top rank of Afrobeat musicians, not just in Nigerian, but Africa.

He is not just unique in his work rate, but also in his sound that stands him out among many, creating his own unique flavour of Afropop music. According to him, his music is mostly inspired by life generally with its challenges, especially drawing from the numerous number peculiar to Nigerians and then, ladies who would find several attractions in his music.

Holmes’ latest single, which featured one of the greatest DJs in Africa, DJ Neptune has been attracting massive positive reviews. The Amanpiano-inspired song which was released in November, on top digital platforms like iTunes and Boomplay, has been creating melodious fever and has continued to receive positive vibes from industry heads and fans. Finally was produced by P Loops and the video, filmed in a choice reserved factory in South Africa was shot by the Shelf director, Sesan Ogunro

The 28-year-old singer’s music career has continued to skyrocket since his debut single, “Magician” produced by Kel P, followed by his hit single and then the much talked about collaboration with the DMW records honcho himself, Davido, “Love” released early in the year.

If his past and present are anything to go by, Holmes is already stepping into 2021 on a very high note as his popularity and fame continue to grow immensely.