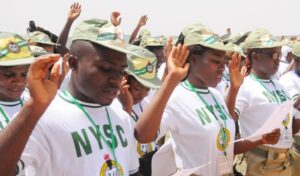 The Federal Government has approved automatic employment in the Federal Civil Service of one graduate each from the families of the 10 corp members killed in 2011 post-election violence in Bauchi State.

Minister of Youth and Sports Development, Sunday Dare disclosed this on Tuesday during the inauguration of the National Governing Board of the National Youth Service Corps (NYSC).

He added that President Buhari also approved scholarships to the four children of Mr Adowei Elliot, a Delta State indigene killed during the post-election violence.

“It has become an integral part of our national development and unity architecture. Nigerian youth continue to benefit from this scheme.

“As a sign of the Federal Government’s unflinching commitment to the NYSC, President Muhammadu Buhari has approved the automatic employment of 10 direct siblings of the diseased NYSC members, who lost their lives during the 2011 post-election violence in Bauchi State.

The Minister called on the board members to come up with initiatives that will make the NYSC more impactful and increasingly endearing to all Nigerians.

He added that the inauguration of the Board is taking place at a time when all hands must be on deck to further strengthen the NYSC Scheme and charged both the returning and new members to continue to get acquainted with the provisions of the NYSC Act.

He assured that President Buhari and the Federal Ministry of Youth and Sports Development are committed to the continued success of the Scheme.

See the full statement below…