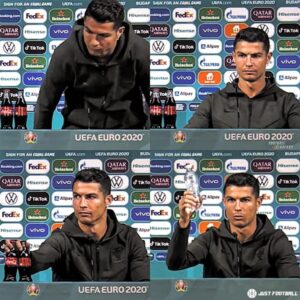 Cristiano Ronaldo’s recent gesture towards bottles of Coca-Cola may have adversely impacted the share price of the company.

Ronaldo removed two bottles of Coca-Cola from his region during Monday’s news conference ahead of Portugal’s game against Hungary. The Portuguese star sat down and spotted the two bottles of the carbonated drink and pushed them aside. Unfortunately, the gesture had a big negative influence on the brand.

The Portuguese international has even said in some interviews that it is important for children to have a healthy and healthy diet, away from sugar and fats. Being asked on one occasion about his relationship with his son on this issue, Ronaldo was clear. “I’m tough on my son. Sometimes he drinks Coke and Fanta and eats chips and he knows I don’t like it,” he said.

YOU MAY ALSO LIKE:   Zedcrest Group Celebrates Customer Service Week

According to The Athletic, Coca Cola’s shares were worth $56.1 each when the market opened in Europe on Monday. But by the end of the press conference, they had fallen to $55.2 each. The 1.6% drop in share price meant a loss of $4 billion dollars in terms of company worth. At the time of writing this article, the stock price has seen some recovery to $55.44.

It is important to note that Coca-Cola shares were on a bearish trend on Monday trading session with a dropped by -1.09%. Investors are expectant of a strong bullish recovery as regards their next earnings release.