Electoral Bill: ‘Buhari Is Under A Curse’ – Aisha Yesufu 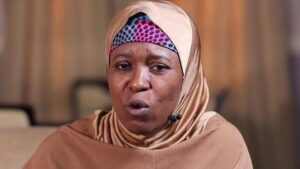 Nigerian activist, Aisha Yesufu has condemned President Muhammadu Buhari for refusing to sign the electoral act amendment bill into law.
Aisha is of the opinion that signing the electoral bill into law is an opportunity for the president to leave a lasting legacy before leaving office.

Naija News reports that the activist shared her thoughts via Twitter.

She wrote: “Buhari doesn’t even like himself! Otherwise he would be the one championing and doing everything possible to ensure that the electoral bill is passed!

“How can someone spend 8 years with zero positive legacy?! Ahhhhhhh!

“The people that placed a curse on him did him bad!”

There have been unconfirmed claims that the reason for the delay in signing the bill is because some governors and top leaders of the APC are insisting the president does not sign the bill.

People are also concerned that the delay might lead to legal uncertainties which will inevitably threaten the integrity of the off-cycle elections in Ekiti, Osun and the 2023 elections.

Meanwhile, the Kenya ambassador to Nigeria, Wilfred Machage has been confirmed dead after collapsing at his Abuja home.

In a statement to newsmen on Saturday, Machage was pronounced dead at hospital in Abuja.

YOU MAY ALSO LIKE:   Shocking: Woman Cries Out After Seeing This Strange Thing Inside Popular Juice Pack In Abuja ( Video)

The statement released by the Ministry of Foreign Affairs disclosed that the ambassador’s wife was with him when he collapsed. Read more

Tags Electoral Bill: ‘Buhari Is Under A Curse’ – Aisha Yesufu