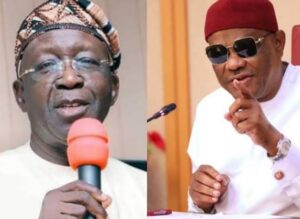 In his usual style, the Rivers State Governor, Nyesom Wike, has come down hard on the National Chairman of the Peoples Democratic Party, PDP, Iyorchia Ayu, warning the former Senate President not be an ingrate as he was brought from the gutter to become the party’s National Chairman.

Wike was speaking on Thursday in Port Harcourt, Rivers State.

Ayu, who many political analysts have described as “a spent force who was in political limbo” had granted an interview to BBC Hausa on Wednesday after the reception for former Kano State Governor, Ibrahim Shekau, who re-joined the PDP.

He had emerged Chairman after a long absence from the political space. Wike was credited with his emergence after an official visit to the state when it was concluded that Uche Secondus would go as the party’s National Chairman.

He alongside the Benue State Governor, Samuel Ortom, pushed for his emergence, which worked.

Ayu said, “When we started the PDP journey, we did not see these children. They are children who do not know why we established this party,” he had said.

“We will not allow one person to come and destroy our party.”

YOU MAY ALSO LIKE:   School Teacher Declared Peru’s New President

But as he is wont to do, the governor replied Ayu while inaugurating roads in Ikwerre LGA of the state, warning Ayu that he should not be an ingrate.

YOU MAY ALSO LIKE:   Oshiomhole Has Always Campaigned in Poetry By Abiodun Adekunle

“Ayu, you were impeached as senate president. Ayu, you were sacked by Obasanjo in his administration. Arrogance cannot take you anywhere.

“Now, we have seen that you don’t want the party to win the election. We will help you.

“These children — these people you call boys — brought you from nothing.”

He accused Ayu of sitting pretty as chairman because of the billions of naira in the PDP coffers which were made from the sale of forms during the party’s primary elections.

YOU MAY ALSO LIKE:   See What Igbo Leaders Demanded From Buhari During Imo Meeting

The crisis in the PDP began after the conclusion of the presidential primary election and the selection of Vice Presidential Candidate.

While Wike had emerged second to the presidential standard bearer, Atiku Abubakar, in the May election, he expected to be chosen as the running mate.

Atiku settled for Ifeanyi Okowa, the Delta State governor, by overruling the decision of the selection committee set up by the party.

The crisis has festered with war of words complicating the already difficult situation, which has stopped the setting up of the PDP Campaign Council.