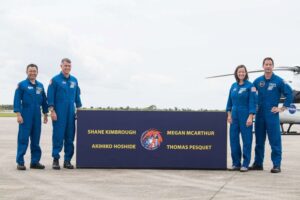 The Falcon 9 rocket blazed across a black sky just before sunrise and NASA confirmed shortly after liftoff Friday that the astronauts had safely reached orbit.

After about a 23-hour ride, the Crew Dragon spacecraft is scheduled to dock at the ISS around 5:10 a.m. ET on Saturday.

“Watching a launch from Kennedy Space Center never gets old for me. I’ve watched many launches and watching a pre-dawn launch is especially exciting and just visually stunning,” NASA’s acting administrator, Steve Jurczyk,​​ said at a post-launch news conference Friday morning. “I could not be more proud of the team.”

3.. 2.. 1.. and liftoff! Endeavour launches once again. Four astronauts from three countries on Crew-2, now making their way to the one and only @Space_Station: pic.twitter.com/WDAl8g7bUK

“What an incredible launch, hopefully you guys got to watch it this morning, right as the sun was rising we took off,” Kimbrough said from the Crew Dragon “Endeavor” capsule shortly after the astronauts reached orbit.

“We chased the sun pretty quickly and caught up just a few minutes after we took off. That was really special to see the sunlight coming in shortly after liftoff,” the mission’s commander added.

👀 Take a look inside @SpaceX’s Crew Dragon Endeavour currently on its way to the @Space_Station. pic.twitter.com/ajdTjhDnqs

McArther said, “The ascent was incredible, the ride was really smooth. We couldn’t have asked for anything better.”

It also ushered in a new era of reusability in human space exploration, as the mission uses the same Falcon 9 rocket that sent four astronauts to the ISS last November and the same Crew Dragon spacecraft that sent and returned two astronauts during the first crewed SpaceX flight last May.

“I met with the crew last night, they are ready to go,” Jurczyk​​ said at a pre-launch news conference from the Kennedy Space Center on Wednesday. “I asked them what they look forward to most in the mission, and they said launching and getting up on station and getting to work.”

YOU MAY ALSO LIKE:   Breaking: Dangote Dies At 64 After Battling Terminal Disease

This marks the “third launch in less than a year” for NASA’s Commercial Crew program, he said.

The launch was originally scheduled for early Thursday morning but was moved to Friday due to downrange inclement weather. Liftoff occurred at 5:49 a.m. ET on Friday from the historic Launch Complex 39A at NASA’s Kennedy Space Center in Florida.

Prior to liftoff, the U.S. Space Force 45th Weather Squadron had forecast a 95% chance of favorable weather conditions in the area for a launch.

YOU MAY ALSO LIKE:   Lagos Assembly Approves 50% Reduction In Pensions Of Former Govs, Deputies

NASA’s live coverage of the launch kicked off at 1:30 a.m. ET on its website and social media accounts.

Jurczyk said Wednesday that NASA’s Jet Propulsion Laboratory team received a call earlier this week from U.S. President Joe Biden, who congratulated the researchers on their success in conducting the first controlled flight on another planet.

“He told the team that his grandson asked him when was he going to travel to Mars,” Jurczyk said. “So that’s something really important that we do.”

“We enable commercial activities in space, we demonstrate leadership, and we inspire the next generation,” he said.