Emefiele Is Focussed On Supporting President Buhari On Economy Not Runing For Office, Group Says 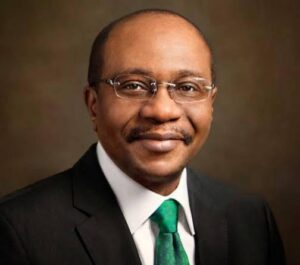 Friends of Godwin Emefiele, Governor of Central Bank of Nigeria (CBN), have declared that he is not planning to run for president in 2023 but focused on delivering on his mandate as governor of the apex bank.

The group, which called itself Friends of Emefiele, said it met with the CBN governor following media reports urging him to run for president to clarify the true situation.

The group in a statement on Tuesday said Emefiele disclosed to them that he had no such plans, except what God has willed for him.

The statement urged those sponsoring a “campaign of calumny to impugn the character of the Governor of Central Bank of Nigeria” to desist and allow him focus on his mission to support President Muhamnadu Buhari in reviving the Nigeria economy.

The group frown at what it called “sponsored media reports on the purported interest” of Emefiele, “in the 2023 presidential race, leading to stampede by interested parties and vested interests who are resorting to all sorts of blackmail, sponsored articles and choreographed comments on social media targeted at tainting Godwin Emefiele’s image, impugning his character and legacy.”

They noted that Emefiele has not confirmed to anyone he is running for President even as he is
constitutionally qualified to do so, and has been under pressure in the past few weeks due to “unsolicited campaign for his candidacy”.

The group explained that after meeting with Emefiele on Monday, he told them he remained focused on his job and will continue to support the President Buhari-led
Federal Government’s economic recovery drive.

According to the group, the CBN governor said he had never lobbied for a job in all his career trajectory.

YOU MAY ALSO LIKE:   MAUREEN BADEJO SPEAKS LIES FROM HELL By FEMI OYEWALE

Emefiele told the group that after his appointment as the CBN governor in 2014 by former President Goodluck Jonathan, he remained “humbled by President Muhammadu Buhari’s decision to grant him an unprecedented second term as CBN Governor- again without lobbying.”

Emefiele told the group that he believed “it’s the prerogative of President Muhammadu Buhari to plan his succession in line with global best practices for good governance for the continuing peace and progress” of Nigeria, “as such he will play his part to stabilise the economy for an orderly transition.”

Taking a historical account of when Emefiele assumed the position of the CBN Governor in June 2014, the group pointed out that “he has calmed the waters and put
Nigeria back on the path of growth,” despite challenges.

After the sharp fall in crude oil prices and a 13-month recession, he initiated major monetary policies that supported the Buhari administration and all 36 State governments, ensuring salaries were paid to steer Nigeria away from crisis.

The group pointed out that the second recession the country entered in 2020 was as a result of the COVID-19 pandemic, yet CBN under Emefiele supported fiscal authorities with N100 billion health sector credit facility, one-year extension of a moratorium on principal repayments for CBN intervention facilities and reduction of the interest rate on intervention loans from 9 percent to 5 percent.

YOU MAY ALSO LIKE:   Electoral Bill: Dino Melaye Threatens To Lead Protest Against Buhari

According to the group, Emefiele also strengthened Loan to Deposit ratio policy, created N400 billion target credit facility for affected households and small and medium enterprises, granted regulatory forbearance to banks to restructure terms of facilities in affected sectors among other interventions.

The Friends of Emefiele noted that ‘those behind the sponsored negative reports are afraid of Emefiele’s towering personality and
service to Nigeria.

“But they must understand that he cannot be stampeded any way. He is focused on delivering the mandate of the Central Bank; he is rebuilding the economy of the country through import substitution policies and using agriculture to create a new rural middle class from ground up.

“Those who continue to criticise the rice pyramid are too ashamed of giving glory to whom it is due.

“Emefiele is focused on his unfinished job and should not be distracted.”