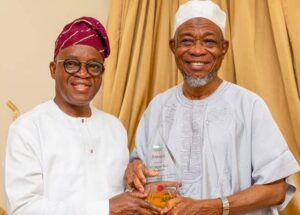 The police have debunked the claim by a faction of the All Progressives Congress (APC), Osun chapter, that some political thugs attempted to kill the Minister of Interior, Rauf Aregbesola, during a roadshow in Osun State on Monday.

The Osun police command said contrary to APC’s claim, it was Aregbesola, his bodyguards and political thugs that attempted to disrupt the peace of the state by “shooting sporadically into the air without any provocation” while moving in a convoy in Osogbo, the state’s capital.

Earlier, the spokesperson of the APC faction, Abiodun Agboola, had claimed that Aregbesola’s convoy was attacked by armed political thugs at Orisunmibare, Osogbo while coming from Ilesa.

“Today’s attempt on the life of the minister is a confirmation that Osun is no longer a safe state.

“We can only pray that the Almighty would keep the good people of Osun and her well-wishers safe,” Agboola had said.

But reacting in a statement, the Osun police command refuted the claim and accused Aregbesola of disturbing public peace.

“Today, Monday, at about 5.40 pm, the Minister of Interior, Mr. Rauf Aregbesola was moving in convoy of personnel of NSCDC, Correctional Service, Immigration, as well as some unidentified armed people, suspected to be political thugs along Orisumbare/MFS Road, Osogbo.

YOU MAY ALSO LIKE:   BREAKING: FG uncovers 123 Companies, 33 BDCs funding Terrorism in Nigeria

“Suddenly, some of the security escorts of the minister started shooting sporadically into the air without any provocation nor attack, thereby causing members of the public to scramble for their safety.

“Thirteen empty shells of G-3, assault, and AK-37 rifle were recovered along the road after the minister’s departure. No casualty, however, was recorded,” the command’s spokesperson, SP Yemisi Opalola, said in a statement.

YOU MAY ALSO LIKE:   COVID-19 LOCKDOWN: FIRSTBANK ASSURES CUSTOMERS OF SEAMLESS SERVICES

According to reports, the shooting incident happened shortly after Aregbesola, who is the immediate past governor of Osun State, openly declared support for the governorship ambition of Alhaji Moshood Adeoti, a former Secretary to the Osun State Government (SSG).

The minister was said to have indirectly attacked his estranged political godfather, Asiwaju Bola Tinubu, while also calling on the people of the state to reject the re-election bid of the incumbent Governor Gboyega Oyetola in the July 16 governorship election.

YOU MAY ALSO LIKE:   Red Star Launches Online Platform For Customs Duty Payment

“It is possible some share your ideals and it’s also possible some do not. This happened in Lagos recently. There was a governor, who wanted to seek re-election and the party declined and showed him the way out with their votes. So, the same way it was in Lagos then, is exactly the way it is in Osun today. What is good for the goose, is also good for the gander. It cannot be the turn of your younger brother now and you change the rules,” Aregbesola had said in reference to Tinubu’s alleged role in stopping Akinwunmi Ambode from being re-elected as Lagos governor in 2019.

Previous Emefiele Is Focussed On Supporting President Buhari On Economy Not Runing For Office, Group Says
Next Abba Kyari Spends Night In NDLEA Custody As Top Police Officers May Be Indicted