Home / cover / #EndSARS Anniversary: Shagari Tells Youths What To Do

#EndSARS Anniversary: Shagari Tells Youths What To Do 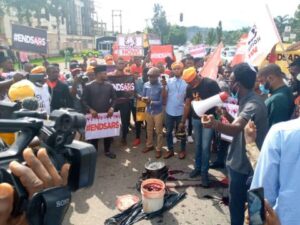 A young Nigerian activist, Bello Shagari, has on #EndSARS anniversary urged youths never to give up on demonstrating their grievances on the street.

According to him, it is best for them to channel their energy in mobilizing young people to register and vote the right people into power.

“Register and vote the right people who understand our plights and would work in solving our problems,” the activist said.

Naija News reports that today mark a year of the nationwide protest that later resulted in bloodshed at the Lekki Toll Gate in Lagos State and other parts of the country.

The EndSARS protest is understood to be a decentralized social movement, and series of mass protests against police brutality and bad governance in Nigeria.

The youths have maintained their energy to remember those murdered in the last year demonstration as they troop out in numbers today to again express their grievances.

Encouraging other youths to join in the demonstration today, Shagari who is only 33 years old took to his Twitter account on Wednesday and say: “#EndSARS was not a movement against anyone. It was an escalation of frustration as a result of disregard for human rights of the youths especially in Southern Nigeria.

He added: “It was a powerful and inspiring force that young Nigerians should transform & reinforce in the 2023 election.

YOU MAY ALSO LIKE:   2 Days after hanging out with Elon Musk, Joe Rogan Dave Chapelle Tested Positive to COVID-19

“#EndSARS United us and divided us at the same time. Until we resist division, we can never succeed in any mission.

“We remember those who have suffered unprofessional policing and mistreatment the on 20th October 2020.

“We shouldn’t spare our energy on the streets protesting for now, It is best to channel it in mobilizing young people to register and vote the right people who understand our plights and would work in solving our problems, & for us to be elected to determine our future.”

Previous National Convention: PDP Begins Screening Of Aspirants For National Offices
Next EndSARS Anniversary: Saraki Tackles Govt Over 5 For 5, Other Promises Made During Protest