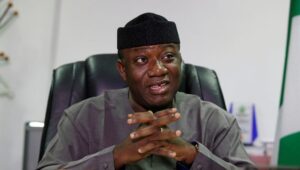 On Monday morning, October 19 after an unusually emotional weekend across Nigeria, where #ENDSARS protesters had revealed the name of those killed over the years by the rogue police unit, the city of Abuja was experiencing an uneasy calm. In the weekend before, the Vice President has shocked the world when he publicly apologized to Nigerians for the errors of SARS after a week that saw their ban- announced by both the President and the IG.

Then came the enfant terrible of South West Politics. The sleazy and uncanny gap toothed Governor of Ekiti state, whose plastic smile bellies his ambition to emerge a national player in 2023 by all means, he led a group of Northern Governors into a clandestine meeting with the President. Having seen a potential opening, he went for the gauntlet as he seized the mantle of circumstance to manipulate President Buhari in their little over one hour private discussions about the #EndSARS movement that had rattled the establishment in the previous 10 days.

The plan was simple; Fayemi speaking on behalf of his colleagues, whom he claimed disagreed with their southern counterpart and with whom he clearly agreed, stated they needed the President to reinstate the dreaded Police Unit in their domain despite the nationwide protests. The President, normally taciturn, listened carefully and promised to revert. He also asked Governor Fayemi to stay behind.

During his elongated meeting with the President, Fayemi was said to have nailed Asiwaju Bola Ahmed Tinubu as the real sponsor of the protests that was rocking Buhari’s presidency. Using proof of Asiwaju’s son relationship with the technology and creative world who were leading minds behind the the protest, he told the President to leave sorting Tinubu to him. Which set off the black operations of Tuesday, October 20.

Fayemi, whose close relationship with Nigeria’s and foreign intelligence network is well known, immediately swung into operation and found an opening in a matter of hours with a deception. First, he leaked his meeting with the President to Asiwaju through his aides, and then seemingly boxed Asiwaju into a corner on Tuesday morning that he had to reveal his sympathies for protesters publicly while calling for an end to protest. This reportedly incensed the President.

Secondly, his security operative network, having mobilized youths the previous night in Abuja to go around marauding on behalf of the President, in which process several lives were lost including cars burnt then proceeded to activate Lagos. This time around instead on focusing on targeting Igbos, he reportedly decided to take advantage of the gap between the curfew commencement to unleash terror on innocent protesters.

As a proof that Governor Fayemi had a hand in the plan, detachments of Black Ops soldiers moved into Ekiti as early as Monday night. A few of them were then sent to Lekki to carry out the hatchet job. The idea behind the Lekki shooting was to insight Lagos against Tinubu and cut off the economic power base of Tinubu’s political power. Such was the power of this narrative, that Black Ops social media handles (now mostly taken down), were the ones that promoted the initial stream of fake pictures from the Lekki protest site after the shooting. A lot of these were later debunked later on Wednesday as the state took stock.

However, it was too late. Mob action promoted by operatives in various Whatsapp forums was busy directing attacks on various institutions of Lagos state, including homes and businesses of both the Governor and Tinubu. The mob action was very coordinated and aligned with the desire of Fayemi. Some evidence of dark money funding of the arsons on TVC and The Nation, were also obtained by our corespondent.

YOU MAY ALSO LIKE:   UBA Promises to Put Customers' Needs First as it Holds 2019 Forum in Lagos

As at the time we are going to Press, the Tinubu political family is in deep state of mourning and are now demanding explanations from the President. This is inclusive of a demand that the President address the nation, and the shooters be brought to book while arsons across the state controlled.

YOU MAY ALSO LIKE:   NSA Monguno Under Fire As He Goofs Again

In an emotional interview granted to Channels TV on Wednesday morning, Tinubu confirmed that “they accused me of sponsoring the protesters last week, and now accuse me of shooting them”. Who is this “they” is what inquiring minds like to know…..

@societygazette
Previous #RIPOke: The Nigerian Protester who Died in the Hands of Protesting Mob
Next The Making Of A CSR Masterstroke: An X-Ray Of First Bank’s Yeoman Effort To Move One Million Children To E-Learning