Home / cover / Omokri criticizes Buhari, Osinbajo for absenting themselves at burial of COAS, other military officers

Omokri criticizes Buhari, Osinbajo for absenting themselves at burial of COAS, other military officers 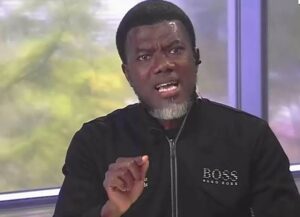 It was earlier reported that Buhari and Osinbajo were conspicuously missing at the burial of the late COAS and other military officers on Saturday.

Attahiru died in a plane crash close to the Kaduna Airport on Friday.

Ten other officers were also killed when the Beachcraft 350 aircraft came down due to bad weather.

Their remains were on Saturday moved to the National Mosque and the Nigerian Air Force Protestant Church venues of prayers.

The burial rites started around 1 pm and were attended by top dignitaries in Nigeria’s Armed Forces.

Their bodies were later moved to the National Military Cemetery for the interment ceremony, where they were honoured with a 21-gun salute.

Reacting, Omokri, in a tweet via his Twitter handle, said, wonder why will anyone want to die for Nigeria after Buhari and Osinbajo failed to attend the burial of late COAS, other military officers.

Omokri’s tweet read, “@MBuhari called General Attahiru a “hero”, but he did not attend his funeral just 15 miles from Aso Rock. Yet, he travelled 4000 miles to Paris.

“Even @ProfOsinbajo did not attend, yet he traveled 2500 miles to Kampala. Why will anyone then want to die for Nigeria? ”

YOU MAY ALSO LIKE:   This Election Is Ize-Iyamu’s to Lose by Ifeanyi Nwaneri

Previous ANALYSIS: Why Nigerians may NOT support submission of Phone ID Numbers to FG
Next Athletico Madrid wins La Liga Again After 7 Years