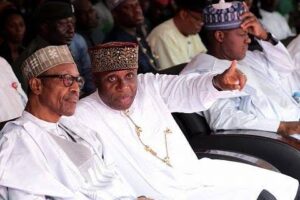 President Muhammadu Buhari and the Minister of Transportation, Rotimi Amaechi, have approved a huge national security-sensitive maritime contract to a medical company in a process the Bureau of Public Procurement (BPP) says is “embarrassing” and illegal, a PREMIUM TIMES investigation has revealed.

The development has unsettled the Buhari government, with senior officials sparring and trading accusations of bad faith and the BPP complaining of “procedural lapses” in carefully worded memos that only stopped short of directly accusing Mr Buhari and Mr Amaechi of lawlessness

Our investigation is based on several confidential government memos and extensive interviews with insiders familiar with the matter.

The procurement agency said the contract was awarded in clear breach of the Public Procurement Act 2007.

The International Cargo Tracking Note (ICTN) scheme is an electronic cargo verification system that monitors the shipment of seaborne cargo and enables a real-time generation of vital data on ship and cargo traffic in and out of Nigeria, a government memo says, emphasising national security and economic benefits.

An operation of the scheme was initially in effect following a President Umaru Yar-Adua-Goodluck Jonathan era contract between the Nigerian Ports Authority and an operator, TPMS-Antaser-Afrique, which was abruptly terminated by former finance minister, Ngozi Okonjo-Iweala, in October 2011.

The controversy surrounding the termination of the contract ended up in a court of arbitration before attracting the interest of the anticorruption agency, the Economic and Financial Crimes Commission (EFCC).

Mrs Okonjo-Iweala then said the scheme was hurting businesses. In the short period it was initially implemented, barely a year, more than 40 million euros was generated in revenue, the Nigerian Ports Authority (NPA) said. It is unclear if that revenue was remitted to government in full.

However, the government now finds the scheme desirable again. A transport ministry memo of August 26, 2021, to the Bureau of Public Procurement says that non-engagement of the scheme would continue to cause the country loss of revenue, worsen the country’s maritime security situation, and allow alteration of cargoes and under-declaration.

In what kickstarted the current process that is now stuck in controversy and abuse, Mr Amaechi’s transport ministry, on September 11, 2020, sought the approval of the BPP to conduct a restricted/selected tendering exercise to engage agents or partners for the implementation of the cargo tracking note scheme, documents seen by PREMIUM TIMES showed.

But citing the “convoluted” circumstance of the initial contract, which attracted criminal investigation by the EFCC and the need to regain international confidence, the BPP rejected the selective tender request and, instead, asked the transport ministry to conduct international competitive bidding (ICB).

“This (ICB) was to ensure that experienced international firms with high reputation, integrity, and capacity to deliver participate in the procurement process,” BPP said in an October 22, 2020 memo justifying the need for an openly competitive process.

But “surprisingly,” the BPP noted in a memo, the transport ministry on August 26, 2021, reverted to the public procurement regulator with an approval dated August 19, 2021 from the president to adopt a direct procurement in favour of MedTech Scientific Limited, a healthcare company, in partnership with Rozi International Nigeria Limited, a property development company.

Direct procurement is single sourcing of a contractor with no room for competition either in a selective exercise, which invites interests from a restricted number of companies based on experience and capacity, or an open exercise, which is publicly advertised for companies to express interest and compete.

After the October 22, 2020 letter of the BPP rejecting the selective tendering exercise the ministry of transport initially requested, Mr Amaechi ceased further communication with the bureau until he was able to circumvent due process to obtain Mr Buhari’s approval for direct procurement, which he then communicated to the bureau on August 27, 2021.

In the period between October 2020 and August 2021, Mr Buhari had in a letter dated May 17, 2021 directed that an international competitive bidding exercise be adopted in line with the BPP’s earlier position.

But Mr Amaechi brushed aside the instructions of the president and the BPP and went ahead to have the Nigerian Shippers’ Council, where the tracking note scheme is now domiciled, to commence a restricted tendering exercise extending invitations to nine companies. This was done because of time constraint, the ministry claimed in the memo of August 27 to the BPP. Curiously, the same president changed his position afterwards and did not only authorise to use selective tendering but in favour of two named companies.

That procedure contravened Section 40(1) of the Public Procurement Act 2007 as there was no approval from the Bureau before adopting Restricted Tendering Exercise, the BPP said in two separate memos to the Chief of Staff to the President, Ibrahim Gambari, and the ministry of transportation’s permanent secretary, Magdalene Ajani.

While the restricted tendering exercise, which the BPP said was illegal, was ongoing, Mr Amaechi decided to jettison the process and consequently “hand-picked” MedTech Scientific Limited, in partnership with Rozi International Nigeria Limited, out of the firms selected to compete for the contract.

He then sought and obtained Mr Buhari’s anticipatory approval to engage MedTech without any competition, a development that was inconsistent with the president’s earlier directive and the public procurement law.

“This procedure is clearly against the spirit and intent of the Public Procurement Act 2007 and if challenged has the potential to embarrass the government,” the BPP said in a memo to the Chief of Staff to the President, Mr Gambari. A similar position was communicated to the transport ministry but the BPP said nevertheless it could not stop the contract given the president’s approval.

The BPP said the transport ministry did not provide the basis for picking MedTech and Rozi International to partner for the project. The ministry had said the companies selected to participate in the selective tendering process were chosen on the basis of “proven records of experience, competency, and reliability to execute the services.”

However, as the PREMIUM TIMES investigation revealed, neither MedTech nor Rozi International had any record of success in delivering maritime traffic tracking service.

On Linkedin, Mr Abou-Hassan said of his involvement in the coast of West Africa, which covers Nigeria, that “It is our intention to continue to leverage our experience of almost 20 years in this region to help build capacity in a very difficult environment and where the level of public healthcare has suffered much neglect for over three decades.”

On the other hand, Rozi International was incorporated in 1991 in Bauchi State, with a Wuse Abuja address, CAC records show. According to the records, the company’s nature of business is property business development, and the directors, as well as shareholders, are Robert Zeitoun, and Issam Zeitoun.

The BPP said the profiles of the two companies were not forwarded for review and therefore could not comment on their “suitability to execute a project of this magnitude and complexity.”

The transport ministry’s spokesperson, Eric Ojikwe, did not comment after we sent written questions to him via a text message.

YOU MAY ALSO LIKE:   Breaking: ASUU Extends Strike By Another Four Weeks

It is not clear if Mr Buhari saw the profiles of MedTech and Rozi International or questioned Mr Amaechi in this regard before granting his approval. Presidential spokespersons, Femi Adesina and Garba Shehu, did not comment. They did not reply to separate text messages to their telephones, nor did they answer calls.

“Insulate the president’s office from embarrassment”

Nevertheless, the BPP separately told Mr Buhari’s Chief of Staff, Mr Gambari, and the ministry of transport that “it is not correct” for the “exalted Office of His Excellency, Mr President, to be drawn into routine administrative approvals particularly contract-related matters that are open to litigation.”

“This procedure should be strongly discouraged,” it wrote.

The Bureau also told the Chief of Staff to advise the president to rescind his anticipatory approval granted to Mr Amaechi in order to ensure an international competitive bidding exercise that is not compromised and to protect the president from embarrassment.

Meanwhile, the BPP also raised a question about the required security clearance from the Office of the National Security Adviser. The NSA had expressed security concerns in a July 16, 2021, memo.

We could not confirm if both Mr Buhari and Mr Amaechi obtained any security clearance before approving the contract to MedTech and its partner Rozi International.

Mr Amaechi and a history of violation of procurement process

Mr Amaechi has at various times got himself mired in arbitrary conduct around procurement processes involving agencies under his supervision, suggesting an aversion for due process.

In a number of contract processes involving the NPA, Mr. Amaechi inserted himself arbitrarily. In one case, he directed the NPA to restore a boat service contract with logistics giants, Intels, in disregard for an ongoing open bidding exercise in which the company had been disqualified.

In this case, the BPP intervened and submitted that Mr Aamechi’s position could create a monopoly and leave a pattern of gaining contracts in ways other than a transparent competitive tendering process.

In addition, in the matter of NPA’s port dredging contract, Mr. Amaechi directed that contracts be extended for a year beyond original expiration dates instead of a bidding exercise, which the BPP had approved.