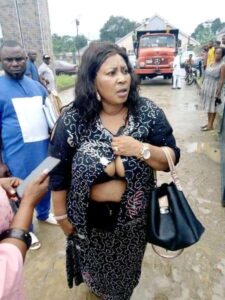 She wanted to escape with the mace, but they wouldn’t let her. Next, a fight ensued.

Cynthia Nwala, who is the leader of the Legislative Council in Etche Local Government Area of Rivers State, was beaten to a pulp and stripped naked within the council premises, amid a brewing leadership crisis in the council.

The incident transpired on Monday, October 4, 2021.

Nwala tells Vanguard newspaper that the assault on her was carried out by the Chief Security Officer (CSO) of the Council, Chinedu Onyechi.

She adds that Onyechi acted on the orders of Etche Council Chairman, Obinna Anyanwu.

“I met the gate of the council locked as I was leaving the office, having closed for the day,” Nwala says.

“The CSO said the chairman ordered them to lock the gate. I asked why, they said I was going home with the mace (the symbol of authority in the legislature). I said the mace is for the Leader.

YOU MAY ALSO LIKE:   Online shopping, the way out of COVID-19 restrictions

“I am to secure the mace due to what is going on in the council. I don’t know what the other councillors are up to.

“The Deputy Leader is acting like he’s the Leader, and one of them urged me to be careful, that I should see what they’re planning.

“The council is under renovation. The place is not secure and the Clerk of the House is not working with me.

“So the CSO said the Chairman said they should come after me. They vandalised my car and started beating me, tore my clothes.

“It was a terrible situation,” she adds.

According to Anyanwu, “that is not true. After screening the Supervisory Councillors, she wanted to cart away the mace.

“That is not her duty to do because the Sergeant-at-Arms is the person that is supposed to be in possession of the mace.

“Because she wanted to cart away the mace, she started having friction with her other colleagues. They locked the council gates and the CSO only waded in to separate the fight.”

Images of Nwala in her torn clothes, have been making the rounds on social to outrage from some members of her constituency.

The police has been called upon to investigate the incident.