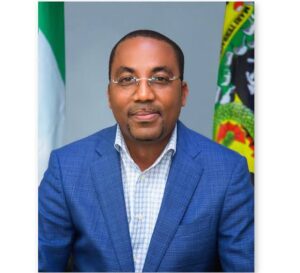 In a move believed to have put an end to the various underhand dealings at Nigeria Ports Authority, the Federal Government has confirmed the appointment of Mohammed Bello-Koko as the substantive head of the Authority and by that token, removed Hadiza Bala Mohammed who had been on suspension.

Recall that Bello Koko has been in acting capacity since May 2021 when Hadiza Bala Usman was suspended by the Federal Government.

In a statement issued today, the Federal Ministry of Transport confirmed the appointment of Bello-Koko as the substantive head of the Authority by President Buhari. 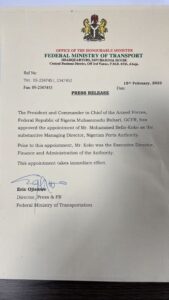 Hadiza Bala Usman, it was gathered was queried over issues relating to favouritism, underhand dealings and outright disregard of court order while she held sway as the Nigeria Ports Authority Managing Director.

According to the sources, she revoked the lease of LADOL and gave same to Dangote’s friend a serving Senator, disregarding a Presidential directive. This move angered the Presidency because Ladol had invested over 300million Dollars and for a Federal Government appointee to display such show of disdain was unheard of.

She also shut down the ports and terminals of the BUA Group for close to one year despite a court order to the contrary. Obviously, her intentions and moves favoured Dangote with a view to keeping BUA Group and other competitors out of business while granting mouthwatering concessions to Dangote Group to create a monopoly. This issue generated a lot of questions from industry watchers.

Apart from this, there were issues relating to the dredging of Calabar port which was believed to have been dare to the Government’s heart, more so that of Transport Minister, Rotimi Amaechi. Sources claimed she claimed the project was not viable whereas findings by specialists disagreed with this.

To cap it all, there were allegations that she was also indicted by the audit report set up to look at the accounts of the NPA.

YOU MAY ALSO LIKE:   “Garba Shehu And His Cohorts Are under the Influence of Drugs” – Ortom replies Presidency

When she was confronted with the issues, especially the audit report as well as the move to create monopoly by Dangote, granting him so much concessions thereby denying the country revenue, our source revealed, she had nothing tangible to say in her defence, hence the decision to boot her out.