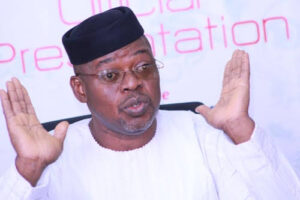 Former Governor of Ekiti State, Segun Oni, has dumped the Peoples Democratic Party (PDP) for the Social Democratic Party (SDP).
Society gazette reports that the former governor of the state made this known during an interview on private radio in Ado-Ekiti on Wednesday.

Oni disclosed that his decision to join the SDP was due to the alleged electoral malfeasance and irregularities during the PDP primary on January 26.

The former governor added that he joined the party due to the continued call by the people for him to contest the June 18 governorship election as a third force.

He revealed that some aggrieved aspirants in the APC and PDP are supporting his governorship aspiration in the new political party.

Speaking further, Oni said the necessary paperwork for him to become SDP’s candidate and his running mate would soon be concluded with the Independent National Electoral Commission (INEC).

The former governor, however, opined that the will and aspirations of the people are the most important structure needed to win the upcoming governorship poll.

He said: “I have chosen to advance my ambition in the Social Democratic Party(SDP) because we are looking at the future, not the present.

“The party has been around for years and won elections in this country, it is a well-known party, that is the reason I chose SDP to contest the June 18, 2022 governorship election in Ekiti state.

YOU MAY ALSO LIKE:   BREAKING: Court Sentence Kidnap kingpin, Evans To Live Imprisonment

“We have seen the potential in SDP because we believe it is easier to sell as a third force for Nigerians. The process to make me a candidate is ongoing and will soon be completed.

“I want to say without any forms of contradictions, that we politicians are coming together for this project coupled with the opinions of people in the streets. We are looking at a familiar terrain and a party with potential and also we are getting support from people that are well known in Ekiti’s political terrain.

“It is going to be a grand collation that will definitely benefit the people of Ekiti. I believe the goodwill of repositioning group, SWAGA and Segun Oni is almost enough to win election in Ekiti”.