Home / cover / FG Inaugurates Committee To Prevent Torture Of Suspects By Police, Others

FG Inaugurates Committee To Prevent Torture Of Suspects By Police, Others 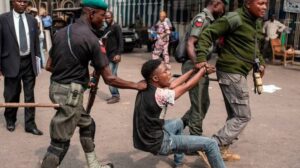 The Federal Government has inaugurated the National Committee Against Torture (NCAT), whose terms of reference include ensuring that education and information regarding the prohibition against torture are fully included in the training of law enforcement and public officers.

The Attorney General of the Federation (HAGF) and Minister of Justice, Mr Abubakar Malami (SAN), inaugurated the Committee in Abuja in recognition of the increasing cases of torture across the country, according to a statement on Saturday made available to THE WHISTLER by NHRC Deputy Director Public Affairs, Fatimah Agwai Mohmmed.

The AGF was quoted to have said that the Committee whose secretariat will be domiciled at the NHRC, is expected to play a crucial role to stamp out torture and other related vices, and to ensure justice to survivors and victims.

On his part, the NHRC Executive Secretary, Tony Ojukwu SAN ) who also doubles as the alternate Chair of the Committee said the idea of NHRC hosting the Committee (Secretariat) aligns with international best practices, given that it brings credibility to the work of the Committee.

“In her remarks, the Solicitor General of the Federation and Chairperson of the NCAT, on behalf of other members commended the HAG for reconstituting the committee. She assured the AGF of the committee’s commitment to satisfactorily implement the terms of reference, particularly with respect to providing timely statutory reports as required under UNCAT and working with renewed vigour towards fighting against the scourge.

“The Chief Custodian of Human Rights in Nigeria, (Ojukwu) recalled that visits to Correctional Service facilities and other detention centres was one of the major challenges of the previous Committee, saying that leveraging on the powers of the Commission to visit such facilities will be highly beneficial to the Committee.

“The NHRC Boss emphasized the need for the Committee to collaborate with relevant MDAs, Nigerian Bar Associations and Civil Society Organizations to identify and escalate complaints of torture so as to facilitate timely redress of these cases by the Committee.

YOU MAY ALSO LIKE:   CDS Irabor Exposes Soldiers Working With Boko Haram, Bandits, Others

“The Committee’s Terms of Reference are “To engage and liaise with Committee Against Torture (CAT) and regional human rights mechanisms in the context of country reporting, interactive dialogue or facilitation of visits by special procedure mandate holders or the Subcommittees on the Prevention of Torture.

“To organize and facilitate the preparation of reports to CAT and regional human rights mechanisms, and of responses to communication, follow up questions and recommendations or decisions received from such mechanisms.

YOU MAY ALSO LIKE:   Falana Gives Malami 7 Days Ultimatum To Provide Information On Trial Of 800 Boko Haram Suspects

“To coordinate data collection and information gathering from government agencies, National Assembly and the Judiciary for the reporting and follow up.

“To foster and lead consultations for reporting and follow up with the National Human Rights Commission and Civil Society Organizations.

“To receive and consider communications on torture from individuals, CSOs and government institutions.

YOU MAY ALSO LIKE:   NCC Releases Guidelines For Replacing SIM Cards Of Dead, Sick People, Others

“To prepare quarterly briefings to the HAGF on cases of torture and propose appropriate administrative/Judicial intervention.