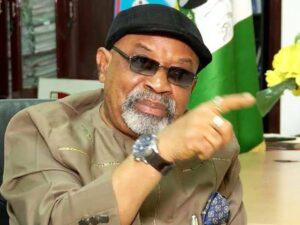 The federal government has inaugurated a 10-man committee to resolve the dispute between the Kaduna State government and the Nigerian Labour Congress (NLC). The government charged the committee to ensure the return of industrial peace to Kaduna in the shortest time possible in line with the expectation of President Muhammadu Buhari.

The committee has 21 days to complete its work and report back to the Federal Ministry of Labour and Employment.

The peace committee was to have been inaugurated over month ago but the state government withdrew from the talks after accusing the NLC of precipitating an illegal protest that disrupted activities in the state.

A statement issued by Deputy Director, Press and Public Relations at the Federal Ministry of Labour and Employment, Mr. Charles Akpan, on Saturday said the minister, Senator Chris Ngige, had inaugurated a new committee headed by Permanent Secretary, Federal Ministry of Labour and Employment, Dr. Peter Yemira Tarfa, to try to resolve the labour dispute.

The committee has Secretary to Kaduna State Government, Balarabe Lawal, and Deputy National President of NLC, Najim Hashim, as co-chairmen, while Director, Trade Union Services and Industrial Relations at the Federal Ministry of Labour and Employment, Mrs. Omoabi Akpan, will serve as secretary.

Speaking at the inauguration ceremony, Ngige recalled that the federal government had stopped the strike initiated by the NLC in Kaduna State in May, with the parties signing a Memorandum of Understanding to restore peace, noting that intervening circumstances made the reconstitution of the committee inevitable.

According to him, the committee was expected to resolve all the issues in dispute between the Kaduna State government and NLC.

The minister acknowledged that the issues in contention bordered essentially on trade dispute. He charged the expanded committee to resolve the issues holistically and be guided by the 1999 Constitution as well as labour laws of the federation.

YOU MAY ALSO LIKE:   Police Academy Fixes New Dates For Screening Of 8th Regular Course - NAOSRE

Ngige explained that downsizing or rightsizing of workforce in any organisation, government or private sector, was a redundancy issue, which must be subjected to the principles spelt out in the Trade Disputes Act, Laws of the Federation 2004 Cap L1.

He stated, “The law says in Section 20 (A) that ‘in the event of redundancy, every employer shall inform the trade unions or representatives of workers concerned of the reasons for or the extent of their anticipated redundancy.’

YOU MAY ALSO LIKE:   Insecurity, Anambra Guber And Fears of Commissioner Kuryas’s Competence

“Section B equally states that the principles of last in, first out shall be adopted in the discharge of the category of workers affected, subject to all factors of relative merit, including skill, ability and any reliability.

“So, in applying this, we must subject it to the relativity of merit, skill, ability and reliability. If somebody has a forged certificate, he should be asked to go because he didn’t merit the job in the first instance.

“If you go to a nursing home and find somebody working in the ward with a Bachelor’s degree in History, he stands disqualified, because he doesn’t have the skill in the first place. He has to go. So, these are the qualifications that must be noted in this principle of last in, first out. It is not absolute. It has exceptions and qualifications.”

YOU MAY ALSO LIKE:   Fire Gut Sunday Igboho's House

The minister noted that the employer had the right to reduce staff strength of his organisation but was bound by law to negotiate redundancy payment to any discharged worker. He further stated that there was nothing wrong with Kaduna State government stopping the expenditure of 96 per cent of its earnings on personnel cost in order to save enough for capital projects, but that it should be done within the ambit of the law.

Ngige informed the committee of Buhari’s expectation of speedy return of industrial harmony in Kaduna State.

Speaking also, Lawal gave assurances of the state government for the restoration of industrial harmony, adding that Kaduna is not at war with labour.

In his remarks, President of NLC, Comrade Ayuba Wabba, assured the committee of labour’s commitment to the resolution of the impasse in Kaduna State.

Previous Commotion As Oniraniken, Oba Adewale Adeniji Stockpiles Arms For Land Grabbers — Invades, Unleashes Mayhem On Ogun Community
Next What Sunday Igboho Must Do To Get DSS, Police Off His Back – Presidency