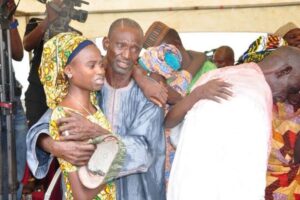 Four Chibok girls have been released from the captivity of the Islamic State’s West Africa Province (ISWAP) fighters.
Recall that the girls were part of the victims kidnapped during an invasion of Kautikari village of Chibok Local Government Area in Borno State on Friday, January 14.

It was learned that the girls were taken to Dille village which shares a border with Sambisa forest before they were released on Sunday afternoon.

Confirming the development, a resident of the town said that the girls regained their freedom on Sunday.

He told Vanguard that the girls are with the District Head of Kautikari village who resides in Chibok town.

“I can exclusively confirm to you that the four young girls who were in the captivity of insurgents have regained freedom today (Sunday).

“I was informed that they were taken to Dille axis of Askira Uba local government area of Borno state which shares border with Sambisa forest.

“Presently, all the girls are cooing off with the District Head of Kautikari who resides in Chibok town,” he said.