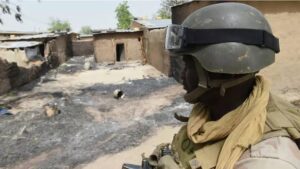 At least 29 people have been killed, with many houses burnt in fresh attacks at Galadima-Kogo and Galkogo Communities of Shiroro Local Government Area of Niger State.
Naija News gathered that the bandits invaded and launched attacks on the two communities after overpowering security operatives on Sunday morning.

In a chat with Daily Trust, the State Commissioner for Local Government, Chieftaincy Affairs and Internal Security, Emmanuel Umar, said over 20 residents were killed during the attacks on Sunday.

Umar added that the gunmen attacked a Forward Operating Base in the area and killed 12 members of the Special Taskforce deployed to the community.

He said “One of our Forward Operating Bases manned by our security was overran during the attack. But we are already strategising to take the fight back to them. Already, there have been ongoing security operations in the area, both air and ground. We are doing our best.”

The Chairman, Shiroro Local Government Area, Suleiman Dauda Chukuba, also said 11 dead bodies have been recovered while nine persons who were injured have been taken to hospital for treatment.

He said: “This is a tragedy that has just occurred on Saturday and I cannot really ascertain the number of casualties for now because the place stands as a no-go area as I am talking to you now.

“The only dead bodies that we have recovered were 11 but that is not the exact number of casualties. A lot of people were affected. Those that were wounded were nine in number and they are in the hospital as I am talking to you.

“As the situation is now, we have not done much about the displaced people. Our concern now is how to make sure we get back the communities that have been taken over by the attackers.”

He, however, dismissed the rumour making rounds that the security operatives were withdrawn before the attacks.