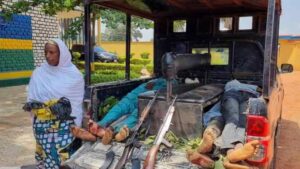 The Kaduna State Command of the Nigeria Police Force has apprehended a woman allegedly supplying firearms to terrorists in the state.
The suspect, Naija News understands was captured by the operatives of the Special Tactical Squad Force Headquarters, Abuja (STS) in a recent raid where it worked alongside Operation Yaki of the Kaduna State Command.

The police command in a statement on Thursday evening said it was on a trail of suspected armed bandits on June 15 when the operatives encountered the targets along Saminaka–Jos expressway in a Sharon vehicle.

YOU MAY ALSO LIKE:   WASSCE: Stakeholders kick against WAEC over increase in fees, penalties

The Kaduna State Police Command’s spokesman, DSP Muhammad Jalige who gave updates on the development said the suspects on sensing an unavoidable danger “posed in their way to deliver some dangerous weapons to their cohorts engaged the operatives, firing sporadically. However, the operatives with tactical precision were able to terminally injure four suspects.”

Jalige explained that the injured suspects were immediately evacuated to Barau Dikko Teaching Hospital Kaduna where they were pronounced dead by a medical doctor.

The encounter according to him lasted about 30 minutes as the firepower of the Police forced them to retreat into the forest with bullet wounds.

He added: “When a search was conducted in the vehicle and around the vicinity, the following exhibits were recovered: one AK-$9 rifle loaded with six rounds of live ammunition, AK-47 rifle, one empty magazine, 134 rounds of different calibre of live ammunition and operational motor vehicle.

“The operation led to the arrest of a female accomplice, who during the investigation, confessed to supplying arms and ammunition to bandits within Kaduna State.”