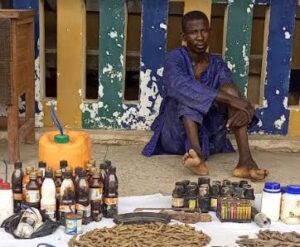 Police operatives in Taraba State have apprehended a man said to be manufacturing bombs and ammunition for Boko Haram terrorists.
The suspect who reportedly hails from Zamfara State is said to also belong to a Boko Haram faction responsible for three bomb explosions recorded in the state this year.

Naija News understands that the suspect was arrested in his house which he uses as a factory in Tella town within the Gassol Local Government Area of the state.

YOU MAY ALSO LIKE:   What Atiku Said About Late Alaafin Of Oyo, Oba Adeyemi

Photos that were taken during his apprehension show a series of firearms, ammunition, explosives, and devices for manufacturing bombs.

The Taraba Police Command said it discovered upon further investigation that the suspect is also a member of a kidnapping syndicate terrorizing, Niger, Kogi and Taraba states for more than a year now.

It could be recalled that two separate explosions rocked Tabara this year. One happened on April 19th and the other was recorded on the 22nd of the same month.

No fewer than 10 persons died in the two separate attacks which happened both at drink joints, Naija News recalls.

Not long after, another explosion occurred at the headquarters of six brigade Nigeria army located in the state capital. Acting on credible intelligence, the police swung into action leading to the arrest of the bomb manufacturer.

Parading the 37-year-old native, the state’s Commissioner of Police, Abimbola Sokoya assured that the force have sprayed their dragnet and soon operatives will capture two other suspects who are currently at large even as investigations continue.

YOU MAY ALSO LIKE:   Fidelity Bank Plc Announces a 53.9% Growth in Profit Before Tax to N10.1bn For the 3 Months Ended 31 March 2021
Boko Haram Bomb Manufacturer Nabbed In Taraba 2022-06-17
Oluwasegun Adesuyi
Share