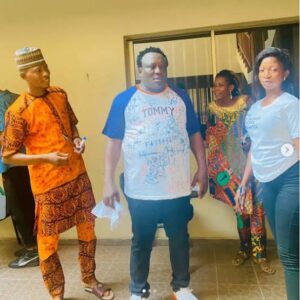 Fuji singer, Akorede Babatunde Okunola popularly known as Saheed Osupa has bagged his first degree from the University of Ibadan.

Naija News understands that the 52-year-old confirmed the development on his official Instagram page on Friday, January 28.

King Saheed Osupa as he is also known, shared that he bagged a Bachelors degree in Political Science from the prestigious University.

Naija News reports that fans, colleagues in the Yoruba film industry as well as in the music industry have taken to social media to felicitate with the ace Fuji singer.

Sharing his signout photos on social media, the film actor said “You don’t have to see the whole staircase; just take the first step for the best view comes after the hardest climb!

“Signing out in style. Alihamdulilai Robil Alamin. I am grateful

“BSc Political Science in the bag. University of Ibadan!

YOU MAY ALSO LIKE:   Update: Identities of Notorious inmates freed During Kuje Prison Attack revealed

Meanwhile, Nollywood actress, Eniola Badmus is currently under fire for campaigning for the All Progressives Congress chieftain and presidential aspirant, Bola Ahmed Tinubu.

This is coming after the 40-year-old actress via her Snap chat shared a campaign photo of Bola Tinubu with the theme; ‘The ABAT Movement’

Barely a month after the public declaration, the actress has however begun her campaign for him.

Disappointed by the move, Nigerians on social media have stormed the social media page of the actress, slamming her over her choice candidate.