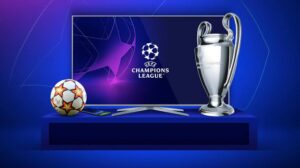 The Champions League draw was done on Monday.

The stand-out tie is undoubtedly the showdown between Paris Saint-Germain and Manchester United, which will see a return of old enmities as Lionel Messi and Cristiano Ronaldo collide once more.

Here are the ties
Benfica vs Real Madrid

YOU MAY ALSO LIKE:   UBA’s Abiodun Coker buries grandmum in Lagos