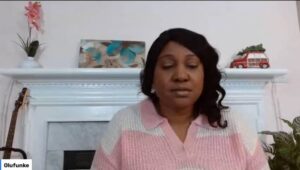 It’s not a new story that Funke Ashekun has decided to point at his father’s house with her left hand just like bastards do. I said I was going to follow up on her stories and expose the ill-mannered agenda that she displays on her program.  For almost 6 months now she has been recycling same stories that have no base and evidence, we have repeatedly asked her to name victims and provide documents to her claims and none has been made available.

It was a very hilarious moment on Facebook as I stumble upon Zibah blog, discussing Funke Ashekun matter. As one that has written, a couple of articles about this ungrateful lady and her plot to bite the finger that fed her, I quickly pulled up a chair to listen to the Facebook exposition, and couldn’t believe what my ears heard about our holier than thou lady FUNKE ASHEKUN AND HER HUSBAND

YOU MAY ALSO LIKE:   Heritage Bank’s MD calls for more impactful role in banking to aid speedy economic recovery

I just found out that her father is in the ogboni confraternity, and the father in-law is a Native doctor, wow, no wonder She has been squealing like a broken record over her imaginary molestation, and people being abused in the toilet of HER FORMER GENERAL OVERSEER.

THE FRAUDSTER AND ADULTERER

After listening to the program that evening, I decided to track one of the callers who gave a stunning revelation ON THE SHOW, to seek more information and really get some facts.

we were told that this woman and her husband has been embezzling church funds, for a long time, to the extent of even building a house from the proceed of their iniquity amidst this the husband on the other hand was basking in the arms of young ladies in the ushering department and the choir department fondling them in other words committing adultery,

find the voice recording of this revelation below:

YOU MAY ALSO LIKE:   2023: PDP National Chairman, Others Meet With Obasanjo

I have repeatedly asked her just one question, AND SHE IS YET TO ANSWER, and that is, since she has been in that ministry for over two-decades claiming to work with your general overseer, have you ever been with him behind closed doors? has he fingered you? has he ever made any pass at you?  if you can name anyone that has any claim to all these allegations kindly provide.

YOU MAY ALSO LIKE:   Just In: President Buhari Sacks Two Ministers

This woman alleged that the office of the general overseer has different chambers, well, I believe the office description she is giving, must be of her father’s shrine, because the OFFICE OF THAT MAN OF GOD is JUST A WAITING ROOM CALLED THE CORRIDOR AND AN OFFICE THAT HE USES FOR COUNSELLING so please FUNKE stop the nonsense.

Kindly click on link below to listen to this deep exposition by Zibah blog and listen to the interview I granted a witness of their atrocities, so you can know the true nature of the Ashekuns