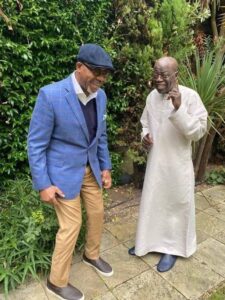 Society gazette reports that the national leader of the All Progressive Congress (APC), Asiwaju Bola Ahmed Tinubu had a nice time with the governor of Ogun state, Dapo Abiodun during his visit to him in London.

Governor Dapo Abiodun joined the long list of important personalities that have visited the ailing politician since he retired to London some months ago.

Tinubu is reportedly sick and went through a knee surgery which he is yet to fully recover from.

During Dapo Abiodun’s visit, both of them were seen having a nice time together.