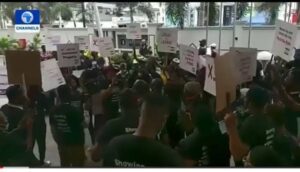 A number of Nollywood stars carried out a peaceful protest at the Radisson Blu Hotel situated on Isaac John Street, Ikeja, GRA.

Jide Kosoko, Fred Amata, Yemi Solade, Mahmood Alli-Balogun, Grace Amah, Ejike Asiegbu, Sunny McDon as well as movie producers and directors were seen protesting over the hotel’s alleged refusal to pay for use of their intellectual properties in their different branches.

The protest was organised by the Audio-visual Rights Society (AVRS).

AVRS boss, Alli-Balogun, said the hospitality outfit has refused to pay for use of their intellectual properties.

He added that negotiations with the management of the hotel has met brick walls, The Nation reports.

YOU MAY ALSO LIKE:   SHOCKING: Former Nigerian First Lady dies of COVID-19 in Abuja

Alli-Balogun also alleged that the hotel is owing the copyright collective society about N50 million.